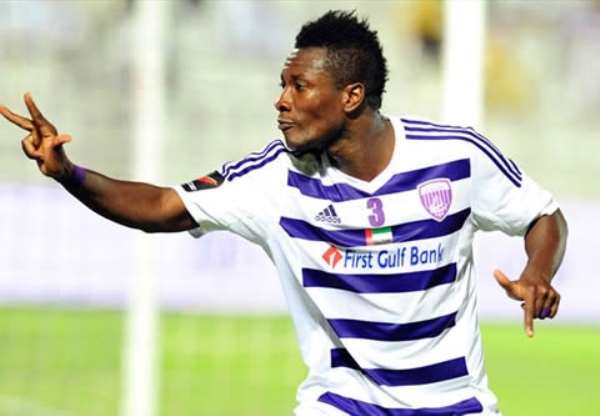 The alleged incident occurred after Gyan was sent off with 20 minutes left for a challenge on Salem Al-Dawsari.

Romanian Pintilii, 29, ran over to Gyan to remonstrate, which sparked a melee between players from both sides.

"The player has no right to tell me what he did. He said something to me which made me upset.

Emirates club Al Ain, who won the second leg 2-1 but lost 4-2 on aggregate to their Saudi opponents, are expected to launch a formal complaint to the Asian Football Confederation after gathering more details about the case.

Gyan, who originally joined the club on loan from Sunderland in 2011 before making the deal permanent a year later, was involved in some pushing and shoving before leaving the field.

He said he deserved the red card, which was shown after a lunging tackle on winger Al-Dawsari when the sides were level at 1-1 on the night.

"I must confess it was a harsh tackle. But in my mind I did not go for the player, I just went in strong for the ball," added Gyan. "I am a professional.

"The referee took his decision. It is football so I cannot complain. I lost my head a bit, but life goes on."