LIVE: Ghana FA President Kwesi Nyantakyi in Day 2 of his appearance before the Presidential Commission 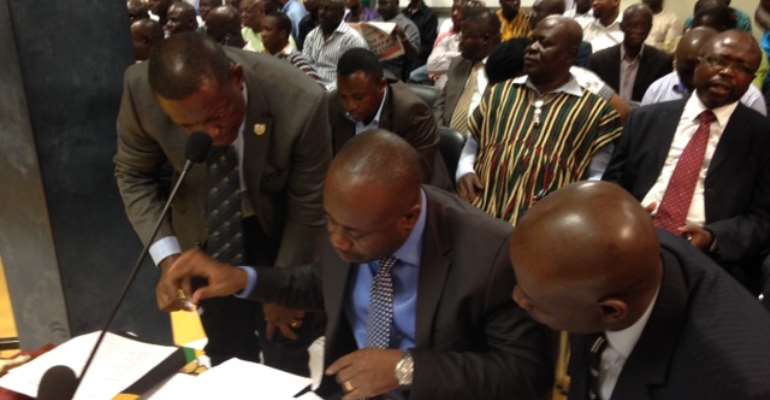 Ghana FA boss Kwesi Nyantakyi is in Day Two of his appearance before the Presidential Commission of Inquiry.

The public hearing on Wednesday opened with the commission requiring to know the religion of the Ghana FA boss since he swore by the Quran in Day One.

Lawyer for the Kwesi Nyantakyi, Thaddeus Sory confirmed:  “It is obvious that by swearing on the Quran, he is a Muslim.”

Justice of the Presidential Commission Senyo Dzamefe has ruled that Kwesi Nyantakyi be sworn in again due to what appears to be considered as a slight mistake in his swearing in yesterday.

The evidence given by the GFA boss yesterday however remains intact.

Kwesi Nyantakyi has however made clear his reservations about treatments he deemed unfair over his swearing in episode .

Commissioner Moses Foh- Amoaning – appearing upset – demands that the Ghana FA President withdraws his statement that appears to have suggested that their opening was a strategy predicted and reported by Citifmonline.com.

Members of the Ghana FA's Executive Committee in attendance

The GFA boss in a sober tone insists he meant no harm and says 'sorry' to commissioner Moses Foh- Amoaning .