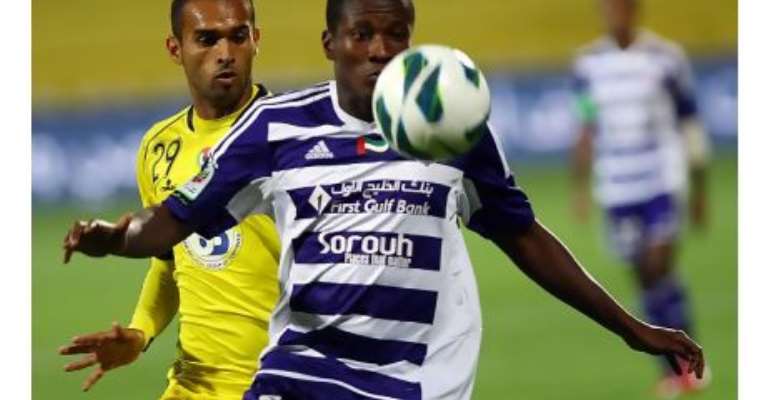 But the Ghanaian drew a blank on a miserable night in Saudi Arabia's capital Riyadh two weeks ago, Al Hilal scoring three times in nine second-half minutes during which Al Ain's goalkeeper Khalid Eisa was sent off.

“Gyan is a special player, a very good striker, probably one of the best African players at this moment,” Romanian Reghecampf told Reuters via email. “Besides the fact he scores very easily he has a lot of experience and will be a real threat to us, but I trust my player's ability to control him.

“Al Ain are a strong team and I am pretty sure the tie isn't finished yet. We need to play very well to qualify, maybe even better than we did in our first game against them.”

By that time, Al Hilal had overcame some early struggles in the ACL group stage to win four of their next five matches to reach the quarter-finals before the competition's summer break.

“Coming to Saudi Arabia is a step forward to me, because I chose to sign for the most important team in Asia,” said Reghecampf.

He will probably need to lead Al Hilal to a third Asian title to justify such a billing for the club. Al Hilal have twice been continental champions in 1991 and 2000, but have made little impression since the competition was re-branded as the Asian Champions League about a decade ago.

“I had other clubs in other countries where it would be easier to go to,” said Reghecampf. “But I'm very happy with my choice and with everything I have found here because there's real chemistry between the president, the fans, the players and the staff.”

Al Hilal have won a record 13 national titles and about 120,000 fans have packed into the King Fahd Stadium for the last two home ties in the ACL.

Such history and loyal support also brings big pressure, with Al Hilal going through more than 20 coaches this century and that turnover seems to be on Reghecampf's mind.

“I actually like to think more about (a) short term plan,” he said when asked for his long-term aims for Al Hilal.

“We have reached the semi-finals and were playing to win the competition. Of course every manager thinks about the future and for sure I want to create something special here.”

Since Reghecampf's arrival, Al Hilal edged past Qatar's Al Sadd 1-0 on aggregate in the ACL quarterfinals before the romp against Al Ain, making it eight successive clean sheets in the competition. Domestically, the Riyadh giants lie second after five wins and a draw in six matches.

“Sometimes we, as managers, are asked to win, no matter how we do it, but for me a true win means winning football matches and pleasing fans, players or the media by playing a good football,” added Reghecampf.

'Give peace a chance', ICoast ex-president tells police
45 minutes ago