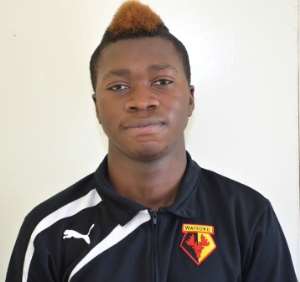 Ghanaian-born UK citizen Peter Danso-Mensah is eager to get the opportunity to realise his dream of playing for Ghana and helping the Black Satellites to conquer Africa and the world once again.

The 18-year-old, who last year had call-up to train with the England U-18 team at the England national football centre at St. Georges Park, recently finished a three-year apprenticeship with English Championship side Watford FC and is currently being considered for trials at Liverpool.

A potential future star, the London-resident teenager he is a left-footed creative talent and plays equally well both as an attacking midfielder and a striker. His attributes include good technique, pace and strength.

“I would like to join the Ghana under-20 football team”, he says. “I am very passionate about football and love my country. So I want to start a career with Ghana as it would be a great opportunity for me to play for my country and make the nation proud.”

Desire is one thing and the ability to do it is another, and the youngster feels he also has got the qualities to make the grade.

“I am hoping to get the chance to play for my nation and the reason why Ghana should be interested in me is because I am a young potential player. I am fast and have a very good technique. I have exceptional pace and strength that make me to break through defences easily. I can also help Ghana to win things.

“I am an unselfish player, who makes great opportunities for my team-mates Also, I have great vision which makes me able to spot goal-scoring opportunities from distance and also to spot my team-mates. As well, I have got deadly finishes even in a one on one situation with the keeper.”

The son of Robert Danso-Mensah – a former consular at the Ghana High Commission in London and now the chief accountant at the Ministry of Interior in Accra – Peter was born in Accra and hails from Nkonya Tepo in the Volta Region. He moved to the UK at the age of seven after completing Primary One at the Achimota Primary School in Accra, but his love and desire to play for Ghana, rather than England, right from youth level remains very strong.

The last of four siblings resident in London, Peter is mixing education with his football dream. He recently completed his sixth form education at Whitmore Sixth Form School in the London suburb of Harrow, and now waiting to enter university.

As part of his development as a player, he has had stints with various teams before being snapped by Watford. They include Pinner Albion, Arsenal Academy, Tottenham Academy, Barnets FC, Northwood Reserves and Parkfield FC. He has also had trials with Luton Town, Wycombe Wanderers and Brentford FC.