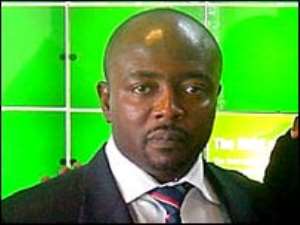 Former skipper of the Black Star Abedi Ayew Pele speaks out on how he helped South Africa win the 2010 WC bid, his relationship with Zumdick, Barreto & GFA chairman, contribution to Ghana soccer and predictions for the future. In an exclusive interview on Hot 106.0FM, in London, Abedi said, following the lose to Germany for the 2006 world cup bid, last year, the team went back to develop a strategic plan which helped them in winning the 2010 bid - the first for Africa. When asked what the strategic plan was, the maestro said three important personalities in the continent were giving the task to handle specific issues.

Former president Nelson Mandela was to talk about South Africa from the past to the present, while President Thabo Mbeki was to talk about the government backing for the bid and how they are going to make sure it was a success. The final person which happens to be Abedi Pele him self was to talk about the development of the game in Africa and the contribution of the African players in Europe and the rest of the world.

On his relationship with former Black Stars coach Ralf Christopher Zumdick, Abedi Pele said its rather unfortunate that the former coach was accusing his as one of the people who don't want the GFA to give him a long term contract. Abedi said he does not have any problem with the former coach but rather it was the former who was not prepared to accept the proposal from the government and other FA members because according to the coach "he can not leave his wife and children about 5000miles away".

The maestro said even though he as giving the mantle to look for a coach for the senior national team, the FA by passed him to appoint coach Ralf Zumdick who was then coaching King Faisal as gap coach till he Abedi gets the services of another coach. Abedi Pele said before the appointment of Ralf Zumdick he was in talks with two coaches that is Frenchman Jacque Nobilo and former captain of the German national team Luther Mathiaus.Even though coach Nobilo was in Ghana for some discussion with the FA for about a week they nothing was agreed upon before the coach left to his native country France. RELATIONSHIP WITH BARETTO AND THE NEW GFA BOSS. Abedi Pele said he has a good relationship with the present coach for they have even met at La Palm Hotel in Accra to discuss some issues about the national teams. The maestro also told HotSportsFM that he even spoke to the coach three days ago and the coach was complaining about the response of the players to camp and also what happened at Burkina Faso during the world cup qualifier for 2006.

With the new GFA chairman Dr. Nyaho-Tamakloe the superstar said his is yet to meet him in person or even talk to him on phone. On his contribution to the Black Stars in preparation for the world cup qualifiers the maestro said nobody has contacted him so he cant just get up and start getting involved with issues about the Black Stars. CHANCES OF THE BLACK STARS IN SUNDAYS GAME. Abedi Pele said even though we lost our first match against Burkina Faso he believes the player put that results behind there and make sure they win against South Africa on Sunday at the Kumasi Sports stadium. According to him we have good individual players but we need to bring them together to get a good team.

On predictions the former skipper said he is sure Ghana will win but cant predict the score line just to prove to his fellow South African friends that the Black Stars are still alive.