From Brazil with tears: Look who is crying? 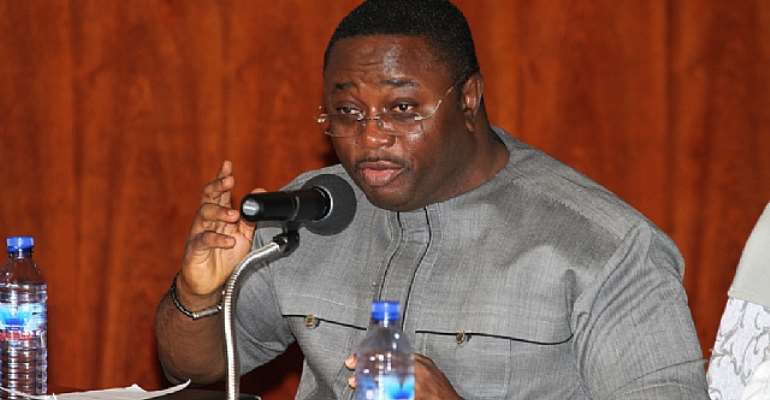 First things first: If wishes were horses, Auntie Comfort's son would be riding all 510 in the James Bond Aston Martin. But certainly, life isn't about wishes and that explains why my Kia Forte's horsepower is only 156. In the same vein, Kwesi Nyantakyi and his Ghana Football Association (GFA) wished away the Presidential Commission of Inquiry–into the Black Stars abysmal showing in Brazil 2014–but lived to witness the work of the commission in spite of their further attempts at bullying every Tom, Dick and 'Kwesi' with the “FIFA will ban Ghana” rhetoric–even going to the point of orchestrating a letter to be sent from FIFA as part of their scarecrow tactics.

Anyway, I thank God the president proceeded to set up the commission per article 278 of the nation's 1992 Constitution. Granted, revelations were expected from the commission's sittings but truthfully not many anticipated these countless jaw-dropping twists and turns we've heard so far heard since the commission started its sitting on August 12, 2014. In fact, with each passing day, the plot to this Black Stars saga in Brazil thickens. No wonder the Hollywood folks are already planning a movie based on this saga. All that is well and good, but ladies and gentlemen, I did not come here to discuss movies—I came to discuss crocodile tears and football.

Tears of a Crocodile!
From the bizarre concept of World Cup ambassadors to the text-and-win promo that never saw the light of day—because MTN (a mobile service operator) launched a similar promo– the Commission of Inquiry has really boasted intriguing moments. Perhaps, the famous one involved Mr. Elvis Afriyie Ankrah, the former Minister of Youth and Sports who led the Black Stars delegation to Brazil. On this day of the inquiry, the chairman of the commission Justice Dzamefe, had to call for a recess as Mr.Elvis Afriyie Ankrah wiped away tears after responding to a question posed by Moses Foh Amoaning as to how the Black Stars could have fared if they were paid on time.

Elvis Afriyie Ankrah crying before the Presidential Commission of Inquiry

For the record, the crying Elvis appears like a whole different person compared with the rather vociferous and finger-pointing individual who in July was on Metro TV's Good Evening Ghana program accusing only the players for the disastrous events in Brazil—even insinuating at some point in that interview that the Black Stars players had disrespected the president of the Republic. Sure, on that show everything played to his advantage because not many people know Paul Adom-Otchere [the host of Good Evening Ghana] for asking tough questions. Contrast that with being quizzed by esteemed legal brains who appear fearless in their quest to reveal the truth and one can easily comprehend the reasons for those crocodile tears shed by a tough individual like Mr. Afriyie Ankrah.

But if his tears sought to galvanize sympathy from Ghanaians, then I'm here to let it be known that it failed miserably—because that singular act has dropped the former Minister's clout level to the lower end of the respect spectrum. And if Mr. Ankrah thought his tears would prevent further probing questions, he was deceiving himself, because the commission probed him on other matters including the selection criteria for caterers taken to Brazil, how many times his younger brother [Yaw Ampofo Ankrah, the Sports Journalist] traveled on official duties to Brazil before the tournament commenced, and countless potential reputation-damaging questions.

Contradictions galore!
The other incidents which have rubbed salt in Mr. Ankrah's wounds are the testimonies of two individuals—Fred Darko, a marketing consultant appointed as the project coordinator of Ghana's Brazil 2014 secretariat and Horace Ankrah, the chairman of the Grounds, Events and Logistics sub-committee of Ghana's participation in the 2014 World Cup. Mr. Darko appeared to have contradicted what Elvis Afriyie Ankrah , the former Minister had said previously that over $4.4 million approved by the government for the 2014 World Cup had been left as surplus. From his testimony, it became clear that Mr Darko had physically transported an amount of money to Brazil. And this was after the infamous airlifting of an estimated $3m to the players for bonus payments. Mr. Fred Darko, explained that the said amount he took to Brazil himself was needed to pay for allowances of for security and balance of accommodation, etc.

On the amount paid to caterers, Fred Darko, said each of the three caterers employed by the committee to cook for the supporters sent to Brazil to support the Black Stars received $17,200 as service charge, whilst Mr. Afriyie Ankrah had earlier told the committee that each caterer received $5,000 dollars as honorarium. Fred Darko contradicted Elvis Ankrah again by saying per diem paid to the ambassadors was $250 each instead of the $200 according to the former sports minister.

As if the aforementioned contradictions were not astonishing enough, on Tuesday, September 9, 2014, Horace Ankrah [no relation to Elvis Afriyie Ankrah], who chaired the Grounds, Events and Logistics Sub-committee, revealed to the Justice Dzamafe-led Commission that the amount agreed with the caterers was GH¢34 , but the amount in official documents was $35, different from how much was finally accounted for. As would be expected, the former Minister of Youth and Sports was quick to attempt some damage control in the form of a radio interview on Citi FM's Citi Breakfast Show on Wednesday, September 10, 2014. During that interview, Mr. Afriyie Ankrah explained the change in figures by saying that, “by every stretch of imagination, the ordinary Ghanaian knows that 10 dollars to give you 2 full meals a day is not realistic, it's not practical.” I am certain that by now the former Minister of Youth and Sports has exhausted his crocodile tears hence this rather persuasive and seemingly logical approach.

Other matters arising:
In between these happenings at the Commission of Inquiry, Adam Kwarasey was sidelined by then coach Kwesi Appiah for speaking his mind about the technical team of the Black Stars during Brazil 2014. Ibrahim Sannie Daara, the GFA parrot was quick to let his voice be heard on this issue—literally running to the defence of Kwesi Appiah, on his decision to exclude Kwarasey. All this while, there had been murmurs in certain football corridors that a Technical Adviser would be attached to James Kwesi Appiah.

2 matches, 4 points later…Kwesi Appiah learned the hard way that his boss [Kwesi Nyantakyi] is as ruthless as Don Corleone of Godfather fame. In some twisted logic, the search for a Technical Adviser had apparently been a perfect coup d'état to get of rid the soft-spoken and diligent [GFA's choice word] coach. You know what they say: “the more things change, the more they stay the same” so I was not surprised to hear Ibrahim Sannie Daara's attempt to once again feed Ghanaians his usual chaff–when explaining the FA's decision to dismiss James Kwesi Appiah. But as a Ghanaian who loves the Black Stars unconditionally, I am praying for some of the same miracle –which turned GH¢34 into US$35 –to turn Kwesi Nyantakyi, Ibrahim Sannie Daara and all their cronies into salt.