Hearts Have Edge Over Lions 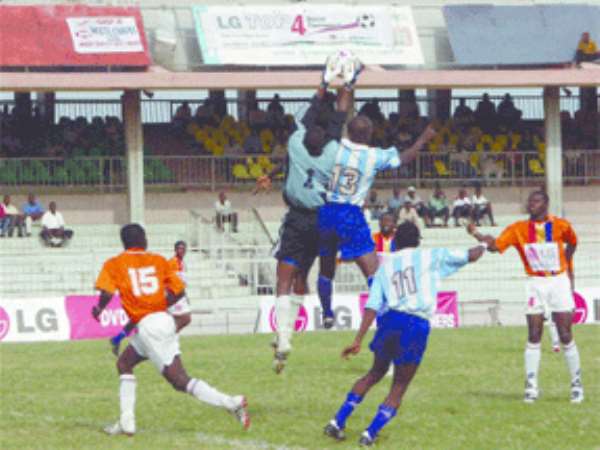 Emmanuel Osei Kuffour, leading scorer in the competition, and Louis Agyemang will be absent from Coach Middendorp's list when the team welcomes Heart of Lions to the Accra Stadium.

Both Kuffour and Agyemang were sent off in Hearts' 3-2 win over Power FC last Wednesday. But in spite of the obvious handicap, Coach Middendorp remains unperturbed and looks up to other options to keep his team on track.

“I played the game (against Power) without five top players; it will make no difference if we go into the next matches without Kuffour and Louis,” the coach said after his side survived an initial scare to topple Power at El-Wak.

“We don't play with names, we play with men and work with materials available,” Coach Middendorp said while admitting the quality of Kuffour and Louis. In that game, Ablade Morgan, Dan Coleman, Francis Bossman and Bernard Don Bortey were absent while Eric Nyarko joined late in the game after Michael Donkor sustained an injury. Skipper Amankwah Mireku was also assigned a central midfield role.

Lions lie second behind Hearts in Zone B, while their 1-0 victory over Hasaacas at Kpando last Wednesday made them one of just three sides with 100 per cent record in the league.

Whatever happens tomorrow, one of the two teams would likely lose their record.After their heavy 4-1 pummeling at Obuasi last Wednesday, a demoralised Kotoko side might find Okwawu United an appropriate launch pad to spring back to life in Kumasi while Ashantigold stand the chance to hit another cricket score when they play B. A. United at Obuasi.

Bofoakwa have a difficult date with King Faisal at Sunyani while RTU travel to Berekum to play Arsenals.

Great Olympics' miserable run may persist at Sekondi where they confront Hasaacas while Feyenoord and Real Sportive clash in a game of debutantes at Cape Coast.Power FC welcome Liberty Professionals to El-Wak in a tough duel.