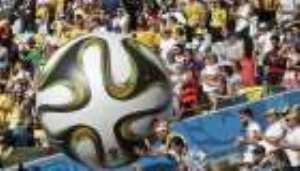 The Ministry of Youth and Sports have released a Press Statement indicating they are investigating reports of Ghanaians seeking asylum in Brazil.

After the Black Stars were knocked out of the tournament, media reports indicated that a number of Ghanaians had stayed in Brazil and were seeking asylum.

The Ministry has responded by launching an investigation into the matter. Here is the press statement in full:

----
Following the media reports of cases of alleged Ghanaian football fans seeking asylum in Brazil, the Ministry of Youth and Sports, summoned the travel and tour companies that were contracted to arrange the travel of the fans to Brazil. The Minister requested for and received thePassenger Manifests of the Ethiopian Airlines ETAOP ET8506 that carried the passengers on the 13th, 14th and 15th of June, 2014 to Brazil and also the Passenger Manifests of the same flight which carried the passengers from Brazil to Ghana on their return on the 27th, 28th and 29th of June, 2014.

A preliminary analysis of manifests and discussions with the travel agents shows as follows:

1. That apart from the Ghanaian fans sponsored by the Ministry of Youth and Sports, individuals and other organizations' passengers were on board the same flights.

2. That the total number of Ministry of Youth and Sports sponsored passengers were 612.

3. That the Manifests reveal that a total number of 807 passengers boarded the flights from Accra to Brazil.

4. That the Manifests reveal that a total number of 704 passengers boarded the flights from Brazil back to Accra.

5. That this reveals a passenger shortfall of 103 yet to return from Brazil.

6. The Manifests reveal that 195 passengers who were privately sponsored by themselves or corporate entities were on board the departure flights.

Meanwhile, the Ministry of Youth and Sports has sought the assistance of the Ministry of Foreign Affairs and Regional Integration to ascertain the actual identity of those Ghanaians alleged to have applied for asylum inn Brazil.