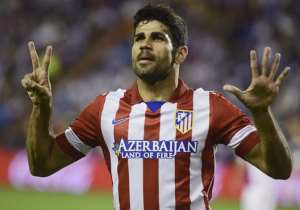 Spain striker Diego Costa has, at  long last , completed his eagerly anticipated £32m move from  Atletico  Madrid to Chelsea, with the club announcing the deal  on their official website .

The move has been long drawn out, with rumours first surfacing some time during the last  Premier League  season, but  Jose Mourinho  now has his choice of striker at Stamford Bridge , with the Portuguese boss clearly desperate for a forward with Costa's goal-scoring record at the club.

Costa told the club's website: 'I am very happy to sign for Chelsea. Everybody knows it is a big club in a very competitive league, and I am very  excited  to get started in England with a fantastic coach and team-mates. Having played against Chelsea last season I know the high quality of the squad I am joining.

'I would like to thank everybody at Atletico who made me into the player I am, it was an incredible time for me, but now I am starting a new adventure and I hope to win many trophies with Chelsea.'

Costa follows Spain teammate Cesc Fabregas in moving to Stamford Bridge this summer, with Chelsea moving fast to bulk up their options ahead of the new Premier League season.

What do you think? Happy Costa's finally signed? Who else do Chelsea need?