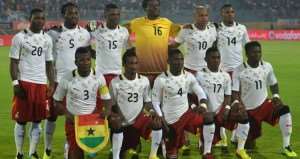 The opposition in Ghana's parliament have condemned the country's President John Mahama for setting Commission of Enquiry into the Black Stars failure at the World Cup while fears of a FIFA ban grows.

Member of Parliament for Abuakwa South, Samuel Atta Akyea angrily condemned President  Mahama claiming he is imposing a Constitutional Instrument 82, which seeks to establish a Commission of Enquiry into the Black Stars' abysmal performance at the World Cup in Brazil.

According to him, Parliament has all the powers to probe into the Stars saga and not a Commission of Enquiry.

He contended that subordinating the Power of Parliament to the executive would be an affront on their existence as law makers.

A motion seeking Parliamentary Enquiry into the matter was voted out by the Majority in Parliament.

This then gives the Presidential Commission the sole mandate to probe into the World Cup debacle.

“Some people are not serious enough in this House that we should subordinate the Power of Parliament to the Executive. How can we do that? It is embarrassing to this House,” Atta Akyea burst out on the floor of Parliament Monday.

He explained that they could not tie their hands behind them and watch the president hijack their work through a CI 82.

If this should happen, “then we must vacate this House because the president is going to dictate to us,” he said.

The MP further noted that some people do not even understand the difference between the executive and the legislature.

Atta Akyea unequivocally described the conduct of the majority as being the height of ignorance on the part of his colleagues and “we will be insulted internally, if we should subordinate our powers to the executive.”

“Parliamentary power is never at the pleasure of the president,” he added.

“What is the meaning of separation of powers?, he asked and added that “What they are inviting you to do Mr. Speaker, might tear this constitution into shreds because it doesn't matter anymore.”

He was surprised at the division on the constitutional matter, which he said was so plain and clear as this. “What is our essence?” he questioned.

Member of Parliament for Sekondi, Papa Owusu-Ankomah also expressed disappointment in President John Mahama for making such a move.

Contributing to Joy FM's News File analysis show Saturday, he added: “We are expending public resources in the wrong direction and we will not receive anything.”

He mentioned there would be a collateral attack on the immunity of the GFA where the commission's report constitutes a judgment of the high court and therefore summoning them before it would mean the officials are on trial.

“That will amount to a collateral attack on the immunity of the GFA officials and clear contradiction of FIFA's statute,” he said.

Let's Avoid Second Wave Of COVID-19 By Following All Protoco...
14 minutes ago