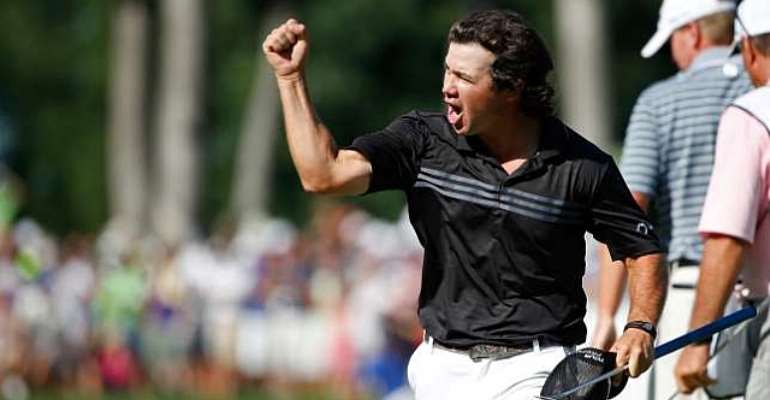 Three consecutive birdies starting at the 14th hole through to the 16th helped Harman card a final round of five-under 66 to edge clear of American compatriot Zach Johnson at the TPC Deere Run on Sunday.

Harman finished at 22 under overall - the second best final score at the event behind Steve Stricker's effort (26 under) in 2010 - for his first win on the PGA Tour having managed just two third-placed performances since 2004.

The triumph also guaranteed Harman a spot at next week's The Open Championship.

"I brought my passport and a couple of jackets," Harman said. "I can't wait to get on that plane."

Johnson - the 2012 champion - was in contention for the majority of the tournament and that was the case again on Sunday as he went bogey-free with a seven-under-par 64.

His excellent display was not enough, however, as he was forced to settle for a second consecutive runners-up cheque at the John Deere Classic.

Venezuelan Jhonattan Vegas (65) and American Jerry Kelly (66) were tied for third, finishing three shots off the pace at 19 under for the tournament.

A shot further back was American Scott Brown (68), who was joined by South Africa's Tim Clark (67).

There was a four-way tie for seventh, with American quartet Bo Van Pelt (65), defending champion Jordan Spieth (66), Ryan Moore (68) and Johnson Wagner (68) all level at 16 under overall.

Australia's Steven Bowditch hit a 68 as he ended his campaign in Illinois seven shots adrift, alongside three-time winner Stricker (72).