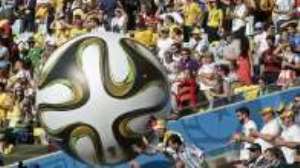 Mario Gotze's 113th-minute volley saw Germany to a 1-0 win at the Maracana, giving the European nation their fourth world crown.

Messi was surprisingly awarded the Golden Ball as the best player at the tournament after scoring four goals, none of which came in the knockout stages.

The Barcelona forward said that meant nothing after his team's devastating loss.

"This was a chance to give the fans some joy after all the sadness," Messi said.

"Golden Ball is not important. All I wanted was to lift the cup."

Gonzalo Higuain missed a one-on-one in the first half before Messi and Rodrigo Palacio squandered opportunities after the break.

"We had our chances but we could not score. In games like these that is not acceptable," Messi told reporters.

"We played a good game against a very good team. We deserved more, but we could not take the cup back home."