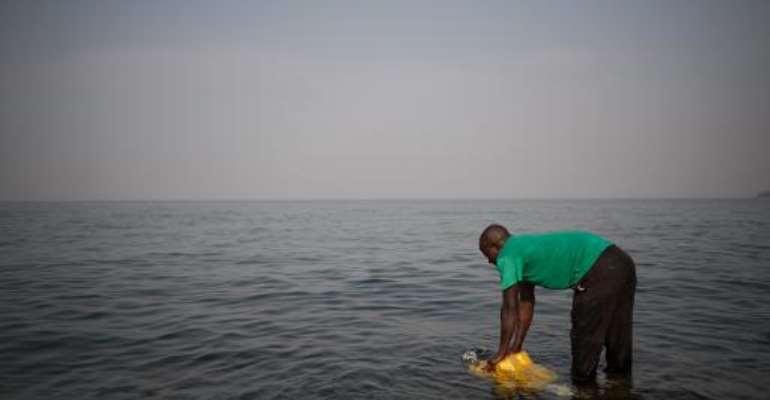 A man fills a jerrycan with water from Lake Kivu on the Himbi beach in Goma, in the east of the Democratic Republic of Congo on August 11, 2013. By Phil Moore (AFP/File)

Goma (DR Congo) (AFP) - Goma, a city in eastern Democratic Republic of Congo, sits by one of the world's largest freshwater reservoirs and has some of Africa's heaviest annual rainfall, yet it is a thirsty place.

Most of the city's one million residents, living close to the shores of Lake Kivu, have to struggle every day to fetch water home.

From daybreak, an endless stream of cyclists heads to the lake and back, filling battered containers with as much water as they can carry.

In a makeshift shelter, health worker Fedeline Kabuhu tries to ensure that no container leaves without a dose of chlorine, which she injects with a syringe to make sure the water residents collect is potable.

"The people drink this water. They do everything with it," the 46-year-old French charity worker said.

A single cyclist can transport up to 120 litres (about 250 pints) to be sold on to private water stores. At a rate of 10 trips to the lake each day, the carriers can expect to earn up to $10 (seven euros) between dawn and dusk.

But by the end of one morning it started to rain and water collector Lambert Biriko decided to call it a day.

"Today is ruined," he said, adding that residents would gather run-off rain water instead and "won't buy anything from us".

Located on the border with Rwanda, Goma is the capital of DR Congo's North Kivu province, which has been wracked by bloody unrest for more than 20 years, displacing scores of thousands of people.

In those two decades, the city's population has exploded, swelled by an influx of refugees from neighbouring Rwanda and Burundi as well as local Congolese seeking shelter from marauding armed bands.

At the Sports Circle roundabout in the centre of Goma, an old woman washed herself in a puddle next to a pump where lorries fill up with water before transporting it to other neighbourhoods.

Fiston Mugisho, 20, is unemployed and spends the day washing the few motor-taxis that want to stop. He has to buy water from the cyclists each day or walk to another neighbourhood where houses hooked up to the main grid sell what comes out of their taps.

"But you don't always find water," Mugisho said. Even for those properties that do enjoy running water, the supply is frequently cut.

As in many other parts of DR Congo -- the world's least developed country according to the United Nations -- the people of Goma have learned to fend for themselves after decades of government neglect.

The lack of basic infrastructure has given rise to the Lucha (Fight for Change) protest movement. A shortage of water, electricity and opportunities for work shows "a problem of governance" and "a lack of seriousness", according to Micheline Mwendike, a member of the apolitical body.

Alongside other organisations, she said, Lucha gathered 3,500 signatures at the end of May for a petition demanding that provincial governor Julien Paluku commit to connecting Goma to the water supply and publish "a plan to bring water to the entire city".

Backed by regional segments of the political opposition, Lucha is gaining momentum as it accuses authorities of using the insecurity as an excuse for inaction.

The movement stages regular protests and has harnessed the power of social media, using Facebook and the Twitter hashtag #GomaNeedsWater.

Paluku did not respond to repeated requests for comment from AFP.

Deogratias Kizibisha, the North Kivu director of public water distribution firm Regideso, said that 45 percent of Goma residents are connected to the central supply. Lucha claims the real rate is closer to 20 percent.

"Adding chlorine is not enough" to make water gathered from Lake Kivu safe to drink, he said.

"Every week patients come to us with diarrhoea or fever" caused by drinking polluted water, Kambere added.

Not far from the health centre, Joelle, a frail woman of 20, crouched at a public tap, bent double under the weight of the container strapped to her back with a scarf.

"It's not normal to live like this," she said. "The authorities need to provide water to every home."