To Whom Is The Bank Of Ghana Accountable? 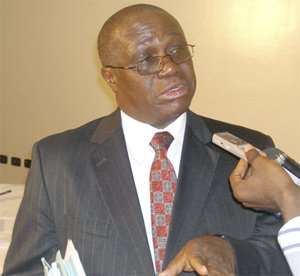 Things seem to are gradually changing for the better in Ghana - at least where an understanding of political issues are concerned.

For on 1 July 2014, a group of 'concerned citizens' gathered at the Efua Sutherland Children's Park in Accra to protest against what they see as the economic mess into which the Government has led the country.

They numbered only about 500 people. But that was not the point. The point was that on a rainy day; on a day on which petrol was almost impossible to find anywhere; on a public holiday when people were expected to relax from the labours of the previous week, 500 Ghanaians gathered together, voluntarily, to give expression to a political idea.

They were not organised by a political party, so it could not be said of them that they had the selfish motive of seeking to take over power from the ruling NDC, in order to share public jobs amongst themselves and thereby improve the lot in life of their members (which is what political parties often do!)

They were not afraid that the police, with their fearsome-looking riot control gear, would set upon them and brutalise them.

Nor did they fear that the security agencies would secretly photograph them and open files on them as potential 'subversives.'

Above all, they showed publicly that not all Ghanaians are apathetic about political and economic issues. Many Ghanaians, of course, go by the ancient motto: 'Country broke o, country no broke o, we dey inside! Ah, cost-of-living i-no be Government palaver? Me? What I got fit say?'

And they showed that they don't care if they are made fun of: some micked them by swaying that they were all 'middle-class' people - without realising that they were actually paying them a compliment, since middle-class people are usually the most complacent and self-centred section of any society. To get a group of people from that class to think away from the satisfaction of personal desires and ambitions and begin to ponder issues that concern society as a whole, is a praise-worthy effort in its own right.

Well, on such middle-class social platforms as Facebook, and Twitter, they publicised the objectives of #OccupyFlagStaffHouse and invited users of the social media to sign an electronic version of the petition they sent to the President, Mr John Dramani Mahama. They have undertaken to wear red apparel on Fridays, in order to emphasise that their struggle for the amelioration of economic conditions, is a continuing one.

But even more spectacular is a news item published by the Daily Graphic on 11 July 2014.

The Bank of Ghana (BoG) has been dragged to the Supreme Court over the depreciation of the cedi. A private legal practitioner, Dr John Ephraim Baiden, is asking the court to order the Bank to put in measures to provide a stable currency....


According to the plaintiff, the BoG was enjoined by the 1992 Constitution and the Bank of Ghana Act to maintain a stable currency for the benefit of Ghanaians and businesses. The plaintiff [is therefore praying] in his capacity as a Ghanaian who has lost wealth through foreign exchange rate losses, ...the court to direct the BoG to provide a stable currency.

Dr Baiden is urging the Supreme Court to issue an order ofmandamus on the BoG or its Governor and the Board of Directors to provide a stable currency and a change from a floating exchange regime to a fixed regime or a reasonable, adjustable, peg regime.... The plaintiff is also seeking a declaration that upon a true and proper interpretation of Article 183 (2) (a) of the 1992 Constitution of Ghana and the Bank of Ghana Act, 2002, Section 4 (b), BoG has neither promoted nor maintained a stable currency for the Republic of Ghana.

Article 183 (2) (a) of the 1992 Constitution provides, 'The Bank of Ghana shall promote and maintain the stability of the currency of Ghana and direct and regulate the currency system in the interest of the economic progress of Ghana....'

Counsel for the BoG, Mr Samuel Codjoe, [has] ...in a motion on notice for preliminary objection, [claimed] that the action had been wrongly commenced at the Supreme Court. His grounds [are] that 'the complaint ... is basically to the effect that [BoG] has caused a depreciation in the value of the Ghanaian currency, but [he has] deliberately couched [it] as an application for interpretation of the Constitution, in order to bring the action within the ambit of articles 2 (1) and 130 of the Constitution'.

I am thrilled beyond belief by this report. An order of mandamussought in a Ghana where public-spirited lawyers can be counted on the fingers of one hand? I do hope that all the lawyers who understand economics will join together with Dr Baiden, on a pro boon basis, to present and argue this case successfully. It is time our pompous institutions were told that they were set up to benefit the people, not to become a waste-pipe through which the people's efforts are seeped down the drain of impoverishment.

The election petition cut the Electoral Commission to size, in the eyes of the public. This case should,similarly, cut the Bank of Ghana to size. I can't wait for Dr Wampah to take the stand and be grilled in the same manner that Dr Afari-Gyan was, in 2013.