Mario in trouble: Balotelli poses with gun on instagram 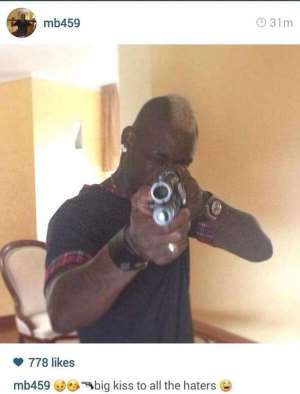 Mario Balotelli has angered officials at AC Milan for making another headline in the news for the wrong reasons.

The Italian striker posted a picture of himself - pointing a gun in the camera as he took the shot - on instagram .

The player added the message: 'big kiss to all the haters' with a gun emoticon and some others showing different facial expression.

'I have my own ideas about social networks and I've tried many times but our lawyer has always stopped me, saying that it would violate individual rights.

'In contracts it's written what players can and cannot do, but we can't do anything regarding their private lives. We do it vocally but that's not enough.'