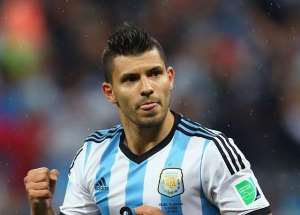 Joachim Low's side were devastating in taking apart a woeful Brazil 7-1 in Tuesday's semi-final as they reached a record eighth showpiece.

By contrast, Argentina needed penalties to get past Netherlands on Wednesday after 120 minutes of a dour, goalless affair in Sao Paulo.

The two teams' comparative last-four displays have led many to suggest that Germany are the favourites for Sunday's showdown at the Maracana, a view shared by Aguero.

"Germany were always the favourites, along with Brazil, to win the World Cup," he said.

"They continue to be so now. We need to play our own game and it suits us that all the pressure is on them.

"We are in the final and we have to play it and win it in whatever way possible."

Aguero has struggled with a thigh injury throughout the competition, missing both the second-round and quarter-final ties before returning as a substitute on Wednesday and tucking away his spot-kick in the 4-2 shoot-out victory.

"When you come back from an injury, it is always in the back of your mind whether it will return," he said.

"I had to train and try to be as good as I could be. When you miss three games, especially in a World Cup, you realise what you are missing."

Argentina continue to have injury concerns over Angel di Maria, who limped out of the last-eight win over Belgium with a thigh problem and was not available for selection against Netherlands.

Team spokesman Andres Ventura provided an update on the winger, whom he refused to rule out of contention for Sunday's clash.

"His progress is obvious. He will be observed over the next few days to see if he will be fit."