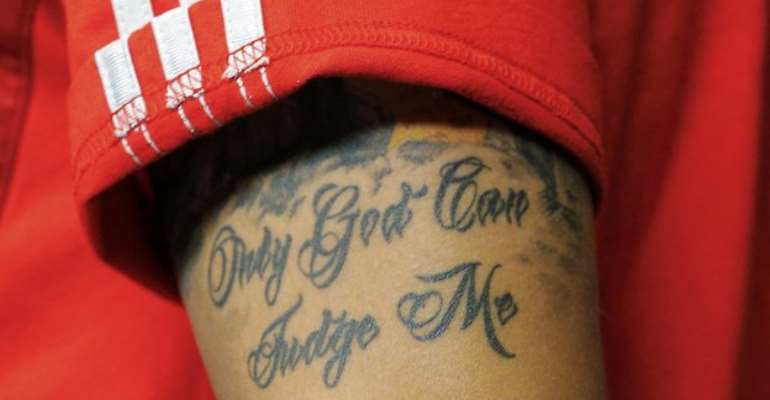 The World Cup in Brazil has been described as the best in the tournament's history, with more goals and upsets than usual. Audiences have also noticed an explosion in tattoos. But what stories do they tell?

Pinilla
This is the most “World Cup” of World Cup tattoos. Inked in in just the last few days, it serves to remind striker Pinilla of his own near-miss in extra time during the second-round game against Brazil.

Chile were later knocked out on penalties, with Pinilla having his attempt saved.

The line “One centimetre from glory” adds to the tattoo's hair-shirt quality. “It illustrates the depth of despair this individual is feeling,” says David Fletcher, a sports psychologist at Loughborough University.

“It's interesting that the tattoo is on his back, rather than his arm or wrist. It suggests that he's not using it as a spur to further action but more of a statement of how close he came to glory.”

Sergio Ramos, Spain
Sergio Ramos
The twin offerings – one on each calf – from the Real Madrid player show the World Cup and Champions League trophies. Spain did not win the former until 2010, while Real had to wait 12 years to take the latter for a record 10th time. Ramos and his teammates had high hopes of retaining the World Cup trophy in Brazil, but they were knocked out in the first round. “Not every tattoo has a narrative, and even those that do are often contrived,” says Matt Lodder, a body art historian at the University of Essex.

Nigel de Jong, Netherlands
Nigel de Jong
The artist Ade Itameda, who draws inspiration from traditional Indonesian ornaments, patterns and carvings, designed the warrior-like tattoos covering the torso, arms and hands of midfielder Nigel de Jong. “The warrior theme shows just how central the World Cup is to his very being,” says David Fletcher. “It demonstrates that this one, gladiatorial moment in his life is core to his being and that there is no doubt in his mind that this is the defining moment of his life. It's not just a game to these guys. They've trained a whole lifetime and it comes down to a few moments.”

Daniele de Rossi, Italy
Daniele de Rossi
The midfielder plays up his own tough approach, which has sometimes got him into trouble , with a mocked-up triangular “hazard” sign of a tackle being performed. It looks like a warning of a slippery floor left behind by an office cleaner. But the tattoo has a bit of extra edge, as the opponent's leg is hacked away. Because of the need to wear socks during football matches, it is usually seen only in training.

Neymar, Brazil
Neymar
The injured superstar's neck inscription has a philosophical edge, much-needed following his team's semi-final performance. The expression “Tudo Passa” translates into “Everything passes” or “Nothing lasts” in English. Neymar, who left the tournament early with a broken backbone, had to watch as his side were beaten 7-1 by Germany. At least he has the consolation of being only 22 years old, with a chance of making amends for the team in 2018 and 2022. Neymar also has tattoos on his legs saying “Ousadia” and “Alegria”, meaning “daring” and “joy”, both of which he commissioned before joining Barcelona last year.

Raheem Sterling, England
Raheem Sterling
The teenage winger draws inspiration from his childhood in west London, choosing a picture of a 10-year-old boy staring up in wonder at Wembley Stadium's famous arch, accompanied by the statement: “It's a dream.” “Wembley was literally around the corner,”  he has said.  ”I used to ride my bike round this little car park that was by the stadium. It's something that I've always wanted – to play for England and be the best I can be as a footballer.”

Raul Meireles, Portugal
Raul Mereiles
The montage adorning the entire right leg of the midfielder, who plays his club football in Turkey, works like an autobiography/travelogue. Designs include the baroque Torre dos Clerigos church in Meireles' home city of Porto, a cable car (either in Porto or Lisbon, according to the  Anglo-Portuguese Society ) and a Portuguese Fado guitar. There is a depiction of the Blue Mosque in Istanbul, where his club Fenerbahce is based, at the top of the thigh. This is reached via a red telephone box above the knee – a reminder of Meireles' time playing for Chelsea and Liverpool.

Tim Howard, USA
Tim Howard
The  shot-stopper par excellence  is one of the most decorated of the players on display in Brazil. He has a Superman logo, dragons and a crucifix among his tattoo collection. It also includes pictures of his mother as a young woman and his grandfather in military uniform, which he had done at the  Aurora studio in Lancaster in May . “He brought in some photographs to work from,” says co-owner Sam Wisniewski. “He had obviously thought about what he wanted and he sat down and talked about it. If the design is really personal and we know the full story, that makes the design much better.” Unlike most players, Howard does not usually remove his shirts after matches. In this picture, he was baring his torso as part of a  campaign for the animal rights group Peta .

Lionel Messi, Argentina
Lionel Messi
Messi has his son Thiago's name tattooed on to his left calf, underneath a pair of hands, presumably based on those of the child. They are not believed to refer to fellow countryman Diego Maradona's “hand of God” goal against England in the quarter-final of the 1986 World Cup. Messi's effort is seldom witnessed in matches because it is usually covered by a sock.

Cristiano Ronaldo, Portugal
Cristiano Ronaldo
The Portugal captain is something of a counter-culturalist in modern football, choosing not to have any tattoos. The reason? He frequently gives blood and it's not recommended that people do so soon after getting a tattoo or body piercing, for fear of spreading infections. In fact, it's banned  within four months in the UK .