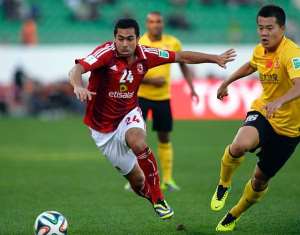 Fathi spent six months on loan at Hull City in the second half of the 2012-13 Championship season, but made just one start and six league appearances in total.

However, the 29-year-old has been given the chance to impress Arsenal manager Arsene Wenger ahead of the 2014-15 Premier League campaign.

Egyptian Premier League club Al Ahly confirmed on their official Facebook page that Fathi will leave for London on Friday and will miss his side's Egypt Cup semi-final on Monday.

"Ahmed Fathi is set to travel to England on Friday to undergo a trial period at Arsenal Football Club in preparation to sign him if he has a successful trial and so Fathi will be unavailable to participate in Al Ahly's game against Smouha in the semi-final of the Egypt Cup next Monday," the statement on Facebook read.

Fathi is out of contract once Al Ahly's cup campaign ends.

He has represented Egypt 101 times, scoring three goals, while he has played 165 matches for Al Ahly since joining them in 2007.

With Bacary Sagna having left the Emirates Stadium in the close-season for Manchester City, Wenger is looking for a new right-back, with Newcastle United's Mathieu Debuchy widely expected to join Arsenal.

But Fathi could provide depth in that position, while he can also play in midfield.