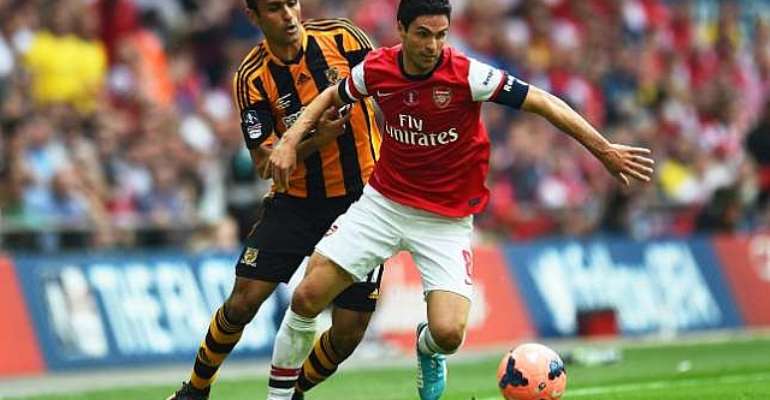 After being regularly criticised for not having a winning mentality over the past nine seasons, Arsenal finally broke through for a piece of silverware in 2013/14 when they came from two goals down, after just seven minutes, to defeat Hull City 3-2 in the FA Cup final at Wembley.

Arteta claimed in an interview with the Guardian that Arsenal's turnaround in May has given Arsene Wenger's side confidence ahead of the new Premier League season.

"When you are under pressure and end up winning that first trophy for a long time it creates a bit of momentum, a bit of belief in what we do," the Spanish midfielder said.

"We need to go to bigger challenges now because for this club the FA Cup is not enough.

"We have been playing for three or four years together now so we have experience, and if we add [players] in the right areas we have a great chance [of winning the title]. I think it is going to be a busy transfer window."

Already Wenger has secured the services of Chile striker Alexis Sanchez from Barcelona, while France full-back Mathieu Debuchy is expected to arrive at the Emirates from Newcastle United soon.

Those two results were followed up by a 6-0 hammering at the hands of Chelsea, with Jose Mourinho's side scoring three times in the first 17 minutes, but Arteta rejects the idea that it is Wenger's focus on attacking, possession-based football is to blame.

"We want to play in an attacking way and the manager will stand by that 100 per cent," the 32-year-old said.

"If you concede five goals away from home you're not going to win, that's for sure. But in the last couple of years we've had one of the best defences in the country so it was a big shame that those three games did not reflect how stable we are.

"We made mistakes and maybe early on in these games we have to be more careful, not take too many risks. But we won't change our philosophy, for us it is the right way to perform."