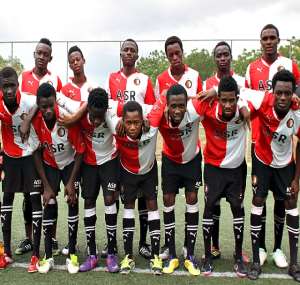 By Rahman Osman
Follow Rahman on Twitter: @iamrahmanosman
Promoted Ghana Premier League side Fetteh Feyenoord began preparations on Tuesday for the task ahead in the top-flight next season.

The Academy Boys were given two weeks off to visit their families after a rigorous season.

Feyenoord won all three matches in the Division One League promotional playoff Zone II against Gold Stars, Eleven Wise and Dunkwa United in May.

They also reached the semi-final of the MTN FA Cup where they lost 1-0 to Inter Allies.

“We had a two week off the lads and they came back in camp yesterday and have taken to the field today,” Feyenoord's Operations Manager George Ofosu Hene told Ghanasoccernet.com

“We are not like other football clubs we are an academy so we always almost all the time have our boys in camp, we manage their diet and all other issues.

“We have been impressed with what we have seen today and hopefully we will get better as the days get closer.”

Feyenoord first tasted Premier League football in 2004 but got relegated after the 2006/07 season.