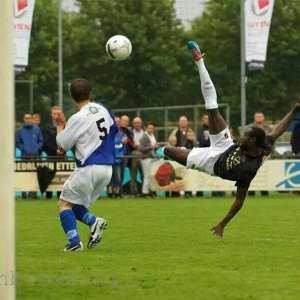 Ghanaian striker Kingsley Boateng scored two goals including a spectacular bicycle kick for his new side NAC Breda in the 16-0 hammering of amateur side DSE on Tuesday.

His pair of goals came in the first 15 minutes when they went up 4-0 with other goals from Seuntjens and Damcevski.

Boateng's second grabbed the headlines when he met a cross from the left.

Compatriot Jeffrey Sarpong also scored two goals and also El Allouchi hit a brace as seven goals were scored in the second half.