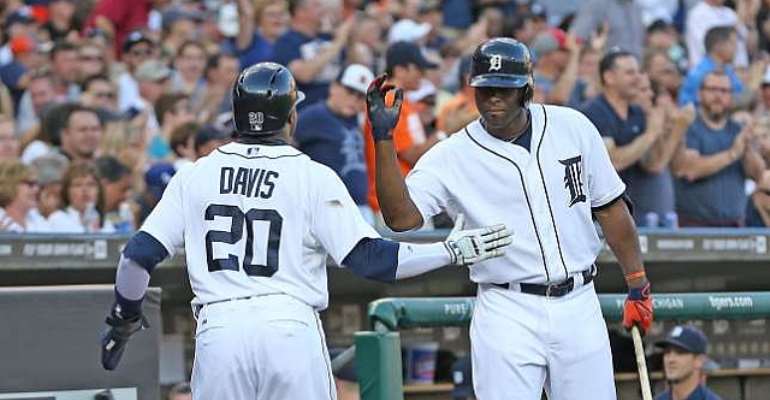 Detroit - the American League Central division leaders - conceded five runs in the first inning but pilled on 14 unanswered as they blitzed the National League's West pacesetters in their series opener at Comerica Park.

The Tigers scored five runs in the second inning to level proceedings and two in the third before adding another four in the fourth.

Another run in the fifth followed, along with two more in the seventh as the Tigers snapped a three-game losing streak.

At Fenway Park, the Chicago White Sox accounted for the Boston Red Sox 8-3 for their third consecutive win.

The White Sox had Conor Gillaspie to thank after he hit a two-run homer in the sixth inning.

Elsewhere on Tuesday, the Reds swept the Chicago Cubs in their double-header in Cincinnati.

The Reds took the first game 4-2 before backing that up with a narrow 6-5 win.

RA Dickey limited Los Angeles to just one hit through his first five innings as the Toronto Blue Jays shut out the Angels for a 4-0 victory - snapping the Canadian outfit's five-game losing streak.

It also condemned the Angels to their first defeat on home soil in 11 games.

The Blue Jays remain second in the AL's East - two-and-a-half games adrift of the Baltimore Orioles, who were not in action after their meeting with the Washington Nationals was postponed due to rain.

Charlie Blackmon hit a two-run homer in the third inning to inspire the Colorado Rockies to a 2-1 win against the San Diego Padres.

The Minnesota Twins shut out the Seattle Mariners for a 2-0 triumph and the Miami Marlins edged the Arizona Diamondbacks 2-1.

In other results, the Oakland Athletics defeated the San Francisco Giants 6-1, while the New York Mets were 8-3 winners over the Atlanta Braves.

The Texas Rangers have lost nine of their past 10 games after falling to an 8-3 defeat at the hands of the Houston Astros.

The Tampa Bay Rays beat the Kansas City Royals 4-3 and the New York Yankees slumped to a 5-3 loss to the Cleveland Indians.

Meanwhile, the St Louis Cardinals claimed their second consecutive walk-off win over the Pittsburgh Pirates courtesy of a 5-4 result.