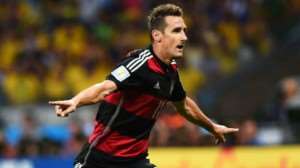 World Cup hosts Brazil were torn apart in a jaw-dropping 7-1 scoreline by a rampant Germany side in Belo Horizonte on Tuesday night to reach the final of the tournament.

The Germans, who struggled to hold Ghana in the group phase of the tournament, dismantled the South Americans which seemed to break records with every passing minute.

Thomas Mueller kick-started Brazil's worst ever defeat after 11 minutes when he was left free in the six-yard area following Toni Kroos' corner – and with it became just the second player to score five goals at consecutive World Cups after Miroslav Klose achieved the feat in 2002 and 2006.

Klose doubled the lead 12 minutes later to begin arguably the most astonishing six minutes in the tournament's history, surpassing Ronaldo's 15-goal haul as he slotted the ball home after seeing his initial shot saved by Julio Cesar.

Next to add his name to the scoresheet was Toni Kroos, who helped himself to a quickfire brace. The first was a volleyed effort from 15 yards and the second an easy finish into an open net following a neat pass from Sami Khedira.

Khedira scored himself to make it 5-0, the Real Madrid midfielder sidefooting home to leave Brazilian players and fans utterly distraught.

Without star man Neymar to inspire in attack or, more importantly as it transpired, captain Thiago Silva to shore up the defence, Brazil were bereft of belief.

Despite their disastrous first half, Brazil did rally somewhat in the second but a series of impressive saves from Manuel Neuer kept the door to a comeback firmly closed.

But Germany refused to show any mercy.
Andre Schuerrle replaced Klose and needed just 10 minutes to score when he slotted in Philipp Lahm's pass. It also meant Brazil had conceded six goals in a World Cup match for the first time in their history.

The Chelsea forward doubled his tally soon after with a thundering left-footed effort from a tight angle that gave Julio Cesar no chance. No team has ever scored seven goals in a World Cup semi-final.

Brazil did, at least, have the final say as Oscar sprinted through to score a goal that was scant consolation to those in yellow.

The humiliation was complete when Brazil's fans started shouting “Ole!” with every Germany player's touch.

Joachim Low's side will face Netherlands or Argentina in the final at the Maracana on Sunday. Luiz Felipe Scolari's side must now prepare for a third-place playoff, while Germany – who overtook Brazil to become the top scoring nation in World Cup history – can look forward to a first appearance in the final since they last won the trophy in 1990.

Let's Avoid Second Wave Of COVID-19 By Following All Protoco...
9 minutes ago