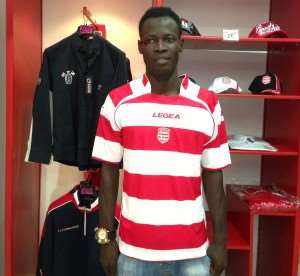 Former Ghana youth star Siedu Salifu has returned to Tunisian club Club Africain to whip his career back onto track, Africanfootball.com has reported.

The box-to-box midfielder was unveiled as one of 13 new signings for the club as they prepare for the new campaign.

The 19-year-old left the club after a confrontation with former coach Landry Chauvin and had some contractual issues to resolve.

Salifu was a star at the 2013 FIFA U20 World Cup in Turkey where he helped the Black Satellites to win bronze.

In August last year, he signed a four-year contract and impressed in the few matches he played for the side- winning back-to-back man-of-the-match awards.