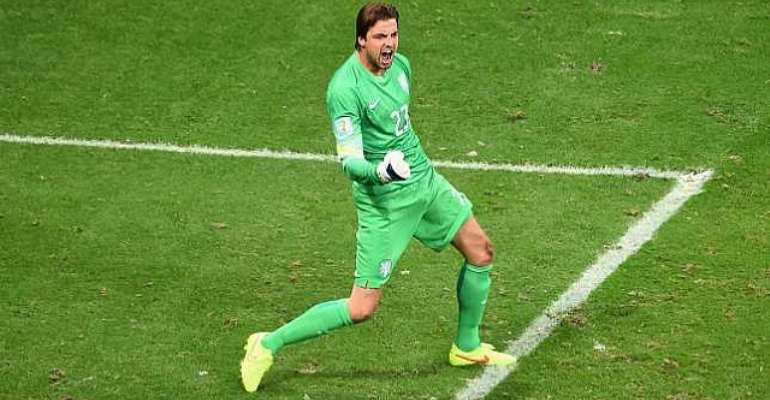 Krul proved to be his country's hero as he came off the bench just before the end of extra-time for Jasper Cillessen, as coach Louis van Gaal felt the Newcastle United man was better equipped to see his country through to the last four.

That proved to be a masterstroke, with the substitute keeping out two spot-kicks as the Netherlands won the shootout 4-3 to ensure they will face Argentina in the semi-finals.

Krul adopted mind games by speaking to Costa Rica players as they placed the ball on the spot and delaying getting back on his line, but the 26-year-old defended his actions.

He said at a press conference on Sunday: "I don't think I have done anything wrong.

"I haven't shouted at (them) in an aggressive manner. I haven't done anything crazy. I just told them I knew where they are going.

"I am trying obviously to get into their heads and it worked. I use everything in my power to make it happen."

Krul also revealed that he had only found out about Van Gaal's plan to bring him on for the shootout just before the journey to the stadium.

"I heard about the plan shortly before we entered the bus. Frans Hoek [goalkeeping coach] asked me to keep it to myself," he added.

And Krul also spoke of his plans to do his homework in case he is called upon to face Argentina in another shootout.

"I'm not going to reveal all secrets, but we will analyse Argentina's penalty takers. We'll make a plan for when it's necessary." he added.