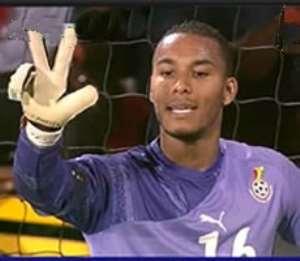 Kwarasey could be considering his international career three years after opting to star for the Black Stars unless the technical direction of the team is changed.

The goalkeeper told GNA Sports that one does not need to be an astronaut to know Nassam is poor quality.

“And it is....you do not have to be an astronaut to see that this is not a quality goalkeepers' trainer. I am not saying this because I did not play, but each time we have had to be in camp for over a week, you get back home feeling worse.

Kwarasey explained “The man has no plan, his techniques are outmoded and there is no clear structure to his training methods. His idea of training is to get us diving around all day. I never had this problem with the previous trainer. And let's be clear; a big team like Ghana deserves to have good technical staff with knowledge and understanding of the game.

“People who can communicate with the players properly. The goalkeepers trainer never exchanged a single word with me after I was dropped, not even how do you feel. It is not about whether I play or not, the idea is that you talk to your keepers to let them know where they can improve when you drop them.

"It is about team work, development and building the confidence of your players, not just making decisions without any clear reasons. Of course it is my responsibility to stay in shape, but it is also the responsibility of the trainer to get the best out of me.

"We can have the best analysts in the world working with the team, but if the technical team in charge do not know what they are doing, the information they supply is useless."

The goalkeeper, 26, cast a doubt about his future with the team, insisting "It will not bother me if I do not get called up again. To be honest, if I get called again and it is the same technical team, like if the goalkeepers trainer is in charge, I will not go because I do not have time to restart myself each time I go to the national team and come back. Something is obviously wrong.

"I want to play and give 100% every time I step onto the pitch, but with the current technical team, the preparation does not enable you to reach your full potential.

"I am not sure I will be in Morocco If I am called up. I cannot say for sure but my mind and my head are telling me no. My heart really wants me to succeed with Ghana, but every time I feel some non-football related holds us back."

Clarifying the issue of indiscipline in the team that influenced the expulsion of Sulley Muntari from camp, he said "I do not support violence of any form; none at all. I do not support Muntari's attack on the management committee member."

Explaining further, he said that "I do not think we will have had a lot of issues in camp if everything happened like it was supposed to be. From the beginning of the journey, everyday there was a new problem... Flights, hotels; just too many things that we as players did not have to worry about."

"The pride that comes with playing for your country is always huge. Such a big shame that we could not go as far as we wanted despite all the massive support from the government and the people of Ghana who deserved better."

Kwarasey said of the quality in the team. "We have a lot of quality in the team and time after time we keep showing that we have what it takes to even beat the top teams. Against Germany we proved that. But it is always the basic things that get in our way."

The goalkeeper has over 20 caps for the Black Stars since earning a call-up in 2011.