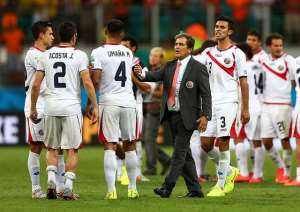 The Central American nation was downed in a penalty shoot-out by the more-fancied Dutch, with Louis van Gaal's decision to sub on Tim Krul late in extra-time in Salvador a masterstroke.

The Newcastle United man went on to save two Costa Rica penalties, to send the Netherlands into the final four in Brazil.

Pinto, though, had no regrets as Costa Rica bowed out, having been given little chance of escaping Group D pre-tournament - and they exit the event without being beaten in regulation time.

"We're hurt but we're happy. When we came here many people didn't believe in us, but during this World Cup we've done many beautiful things," Pinto said, as reported by FIFA.com.

"Even though we have to leave the tournament we haven't been beaten, even by the super-powers we came up against.

"This evening I thought we matched the Dutch and although we can improve on certain things, we're making great progress. We've shown that we can organise ourselves, that we have good tactics and we can play football.

"We have left a positive and dignified impression of Costa Rican football. I'm proud of the players and so is the country. They've given everything they have."