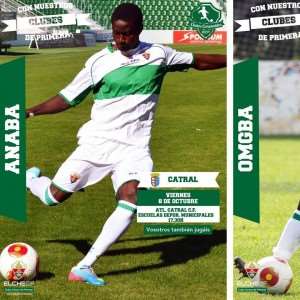 By Patrick Akoto
Former Ghana Under-20 midfielder Michael Anaba left Accra on Saturday night to begin pre-season with  Elche determined to break into the first team.

The 20-year-old has spent the last four weeks in his native country, winding down after a hectic season at the Spanish outfit.

The former Windy Professionals combative enforcer joined the side last year after a fine run at Kotoko and at the international level with the country's Under-20 team.

He signed a four-year deal with the Franjiverdes but could not break into the first team. He was drafted into their youth team and featured prominently for the side.

Anaba has set his eyes on gatecrashing the main squad in his second season at the club.

“It's been a pretty great holiday for me and I'm going back with high hopes,” he told GHANAsoccernet.com

“I believe with hard work and determination, I will break into the first team this season.

“I just have to keep my eye on the ball and wait patiently for my time.

“It's been amazing so far at Elche and I'm really happy to be here.”

Anaba was a member of the Ghana Under-20 squad which won bronze at the 2013 FIFA U20 World Cup in Turkey.