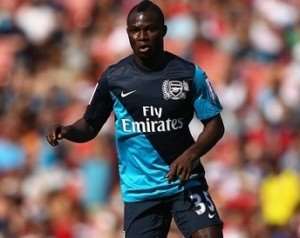 The 22-year-old, who is a free agent, will sign a two-year contract with the ambitious club this week if he is successful in a medical.

“An interesting player. We have had medical tests to him for two days,” Sturm Graz General Manager Gerhard Goldbrich commented on Frimpong's arrival in the city.

“There is no rush. We are awaiting the results of the medical tests. We can then go into negotiations,” said Goldbrich who is seeking to avoid signing an injured player.

The Ghana international has had in his young career already blighted by two ligament tears and could only play nine matches for English Championship side Barnsley last season.

Frimpong tweeted a picture (below) of the the Messe Graz at night, which is located near the UPC-Arena where Sturm Graz play their home matches in the Austrian top-flight saying he likes the city.

Sturm Graz are ready to give the Ghanaian youngster a lifeline after a rather sordid campaign last season after being released by Barnsley.

Frimpong started his career at Arsenal and rose through the ranks to attain first-team status, but his progression was hampered by the ligament injuries.

A move to Austria and regular playing time at the club will revive his hopes of returning to the Black Stars to play at the 2015 Africa Cup of Nations.