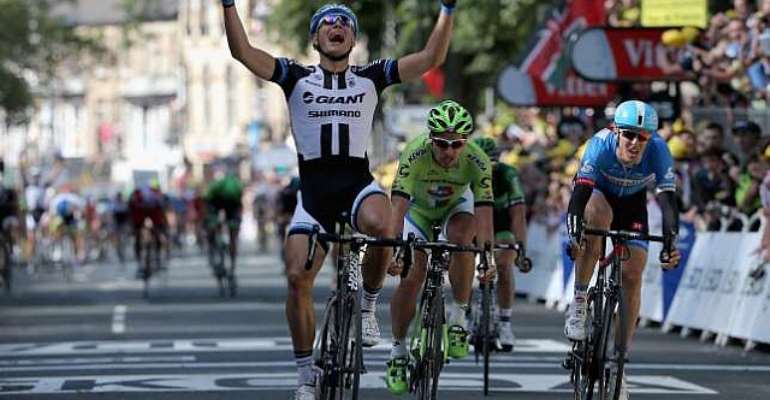 The Giant-Shimano rider will be decked out in yellow on Sunday after timing his sprint finish to perfection to beat rivals Peter Sagan (Cannondale) and Ramunas Navardauskas (Garmin-Sharp) on the line.

His triumph was helped by a crash in the final straight as home favourite Mark Cavendish (Omega Pharma-QuickStep) collided with Simon Gerrans (Orica GreenEdge) and Bryan Coquard (Europcar) before falling to the floor clutching his collarbone.

Cavendish was eventually able to cross the line after some treatment, while Kittel was thankful for the protection provided by his team-mates.

"I think the advantage for me today was the team," the German said. "If you look at the last five kilometres, I think we were the strongest team.

"We had a very good team, we could do it how we wanted, that was really, really important for the victory.

"If the crash had not happened Mark Cavendish would for sure have been there, so we were also a bit lucky."

Kittel only appeared on the scene when it mattered most having been comfortably within the peloton on a warm Yorkshire day on the 190.5km stage from Leeds to Harrogate.

His safe passage over the three climbs was a major factor in securing victory, according to the 26-year-old who will now ride with the yellow jersey on stage two from York to Sheffield on Sunday.

"I have to say that it was perfect for me as a sprinter today," he added. "We could really control the race.

"We could go pretty easy up the climbs, there were no big attacks so it was perfect for us. I could not wish for more.

"The course was not easy, but when you can keep it under control that"s really worth it and when you can save some energy that makes a real difference. It was a good day, a good race.

"I think we all came over the climbs in the peloton, makes a difference to stay fresh in the final (sprint)."