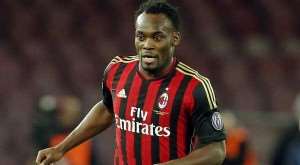 Ghana midfielder Michael Essien is expected to move to the Arabian Gulf this summer as his Italian side AC Milan are keen on off-loading him.

According to reports in the Italian media on Saturday, AC Milan are willing to release the experienced Ghanaian enforcer to pave way for the arrival of younger players.

Clubs in Qatar and the UAE are among those speculated to be keen on signing the former Chelsea player from the Italian giants.

However, clubs interested in the Ghana star must be willing to pay about $7m to secure the rights of the strong midfielder.

AC Milan are seeking the signature of Blerim Dzemaili and the departure of Essien will help them fund the acquisition of the Napoli midfielder.

Greek giants Olympiakos and Trabzonspor are among the clubs also seeking to sign Essien.

He joined AC Milan from Chelsea during the January transfer window but has struggled to hold down a regular playing place in the Serie A side.