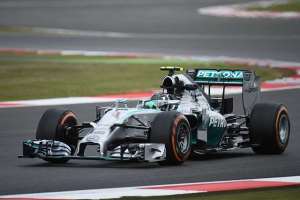 Hamilton was unable to do a race-simulation run in second practice at Silverstone on Friday due to an engine problem.

The Brit still ended up quickest in the session after Rosberg was fastest in the first as their battle atop the drivers' standings in Formula One continues.

Rosberg, who is 29 points clear of Hamilton atop the standings, said his team-mate's issues were a worry.

"It's not good news for us that Lewis had some reliability issues," he said.

"I hope we can sort this out for the weekend."
Rosberg was pleased with how Friday went on a personal level despite tricky conditions, giving him confidence heading into the weekend.

"That was a very productive day and the car felt really great so I'm feeling quite confident for the weekend," the German said.

"We seem to be very quick here and my long run at the end of the afternoon was very good.

"The conditions were quite tricky out with a lot of tail wind which made it really difficult to find the right braking point at some of the corners."