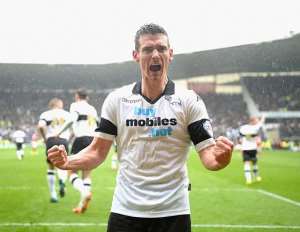 The 27-year-old midfielder had been strongly linked with a switch to top-flight newcomers Burnley but decided to commit his long-term future to Derby on Thursday.

And Derby manager McClaren was relieved to secure Bryson's services after fearing he may lose him.

"A five-year deal is a big commitment but I think it shows how highly we rate Craig," McClaren told Rams Player.

"He had a fantastic season last year but in previous years he has done well too. Craig has fantastic potential and we see more to come from him as well.

"Getting him signed up is a major deal for us and credit should go to Sam Rush [chief executive] and Chris Evans [head of football operations] for getting it over the line.

"I really did think we were going to lose him when there was interest from the Premier League, I thought it would be a huge pull for him.

"So, in many ways, it is like signing a new player.

"He is one of the first names on the team sheet and the thought of losing a damn good player wasn't a good one, so it's pleasing to have him signed up."

McClaren also feels the atmosphere at Derby was a key reason in Bryson's decision to stay at the club.

"I think there's a big attraction here with the culture we are developing and credit to the dressing room for doing that," he added.

"I think once the players reported back for pre-season and Craig got back in the dressing room, it helped to make sure he didn"t step through the door and leave."