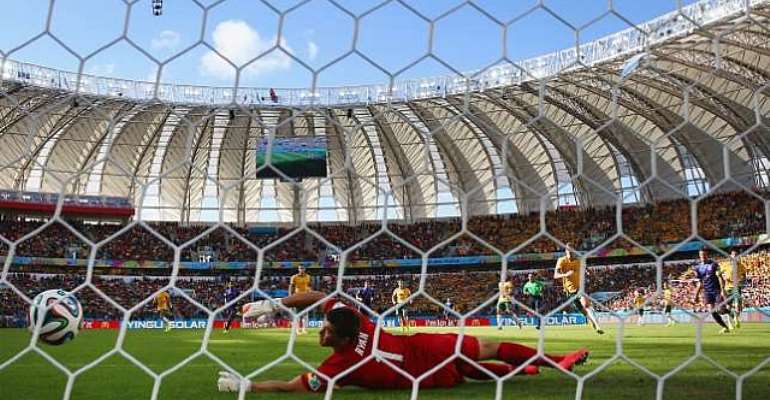 Ryan entered the tournament as the Belgian Pro League's goalkeeper of the year having won the A-League's equivalent award in the 2011/12 season but the 22-year-old had to endure a tough baptism at World Cup level, conceding three goals per game as Australia were eliminated without a point.

While the expectations on Australia heading into the World Cup were low - following consecutive 6-0 defeats to Brazil and France in late 2013 - Ryan maintained he was disappointed with his showing.

Speaking to Fox Sports in Australia, the Club Brugge gloveman conceded his worst memory from Brazil was letting through Memphis Depay's match-winning goal from outside the box in Porto Alegre.

Australia surprisingly led 2-1 against the Dutch in their second game in Group B when captain Mile Jedinak converted a penalty in the 54th minute.

But Ange Postecoglou's side could not hold on with Robin van Persie equalising four minutes later before Ryan failed to push Depay's relatively tame shot around the post in the 68th minute.

"It's never easy for a goalkeeper to make a mistake and unfortunately in the Netherlands game, the third goal, I was pretty disappointed with my effort," he said.

"It was probably the hardest five days of my life yet.

"It's never good making a mistake, let alone on the world stage in Brazil and at the World Cup, and I felt like I let my country down a little bit."

With such an inexperienced team, it seems harsh to blame Ryan for Australia's three defeats but the statistics do not look good for the young goalkeeper.

According to Opta, of the leading goalkeepers of the eight countries to have finished bottom of their respective groups in Brazil, Ryan conceded the most goals (nine) alongside Cameroon's Charles Itandje, while his save percentage (47.06) was only better than England's Joe Hart (20).

Ryan was far from the most overworked goalkeeper of that group either, having faced 34 shots - less than Honduras' Noel Valladares (47), Itandje (46), Eiji Kawashima of Japan and Iran's Alireza Haghighi (both 43).

The fact remains, however, that Postecoglou's team is a work in progress and have the potential to be much more competitive by the time Russia 2018 rolls around.

Ryan reckons Australia will improve rapidly with the Asian Cup looming at home in January.

"We've still got a lot of hard work in front of us," the former Central Coast Mariners goalkeeper said.

"We have to put together performances for the full 90 minutes, not just match it for 70.

"But the reception we received from the public was overwhelming and we're so proud to hear such great words being spoken of the team."