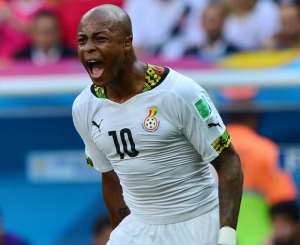 Group G saw Germany predictably run away with the group, claiming top spot with two wins and a draw, but the United States coming in second place ahead of  Ghana  and Portugal was something of a surprise.

Ghana were embroiled in a row over bonus money which saw Kevin-Prince Boateng and Sulley Muntari sent home, whilst Portugal struggled throughout as Cristiano Ronaldo couldn't carry them through.

There were some great performances in Group G, most notably from Germany forward Thomas Muller, who hit four goals in the group stage, as well as the previously ineffectual  Premier League  midfielder Jermaine Jones and former Fulham hero Clint Dempsey as the drove USA in to the last 16 – but  Liverpool should be looking to sign a Ghanaian attacker.

The Reds  have recently endured a number of transfer nightmares, missing out on the signings of Willian, Mohamed Salah and Yevhen Konoplyanka as manager  Brendan Rodgers  looked to add a winger to his ranks.

Today, he finalised the signing of Adam Lallana, which goes some way to helping, but he still should look to add a natural wide man.

One player how has recently been linked with a move to Merseyside after a superb World Cup is Marseille's  Andre Ayew .

The 24-year-old has been a regular goalscorer in Ligue 1 over the past four seasons, and he continued that rich goalscoring vein into the World Cup, scoring against both USA and Germany in Brazil.

He seems destined for a move away from Marseille this summer, with the French side needing to raise funds for new manager Marcelo Bielsa.

A £10m fee has been mooted, and after his superb displays at the World Cup, that could prove to be a bargain that Rodgers just can't pass up – even with the addition Lallana.

With pace, power, goalscoring ability and even an aerial threat, Ayew should definitely be on Liverpool's shopping list.