Nigeria/Ghana: Falconets defeat Ghana's women's U20 side in friendly 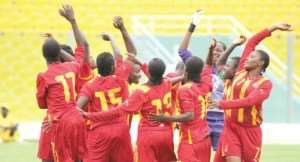 Nigeria's U20 women football team, Falconets defeated their Ghanaian counterparts 1:0 in an international friendly at the Abuja national stadium on Sunday.

Chiwendu Ihezou's 45th minute strike was enough to earn the Nigerian side a win as they stepped up preparation for the FIFA U-20 World Cup in Canada.

The friendly is the last of the four series of International encounters between the two and it was aimed at putting both sides in shape ahead of the World Cup.

The Falconets were the most impressive side in the match, restricting their opponents to their own half during the better part of the match.

Falconets Head coach, Peter Dedevbo, said the his players played as a team.

“I am impressed with the team's performance today. There was cohesion among the players, they put on a tremendous fight. Though, I was not concerned about goals, but rather the physic and mental capability of the team since this is a friendly. The goal however, came and I'm so happy,” Dedevbo said.

He however, noted that the players needed to improve on their finishing.

“They had many scoring chances, but could not execute them well. We shall work on that before the world cup”.

He further praised his girls and hoped that with the preparations both teams will shine in Canada.

“We lost to a better side, but remember the Falconets are playing at home which was an added advantage. We are going back with some lessons to work on the team for better performance”.