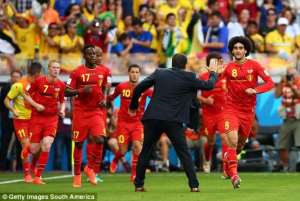 Belgium booked a World Cup quarter-final date with Argentina as they saw off the USA 2-1 after extra time.

Kevin De Bruyne, one of a host of Belgium players to find American goalkeeper Tim Howard in inspired form, smashed into the bottom corner in the third minute of the first additional period after regulation time somehow ended goalless at Salvador's Arena Fonte Nova.

Romelu Lukaku, dropped to the bench having failed to fire so far in the competition, then gave Belgium breathing space with an emphatic 105th-minute second.

But there was further drama as a resilient USA team hit back through substitute Julian Green before Jermaine Jones poked agonisingly wide, with Clint Dempsey also denied late on, before Belgium sealed the prize of a last-eight meeting against Argentina in Brasilia, despite the stunning efforts of the brilliant Howard.

Captain Vincent Kompany returned from groin and abdominal complaints to bolster Belgium's defence, while Divock Origi was favoured to Lukaku in attack.

The 19-year-old almost enjoyed a dream start, stealing in behind the defence to draw a fine save from Howard on the angle inside the first minute.

But the United States quickly settled into the contest and Michael Bradley combined with Dempsey for a 20th-minute opening, although the latter's shot lacked the power to trouble Belgium goalkeeper Thibaut Courtois.

Jan Vertonghen caught USA midfielder Graham Zusi in possession on the halfway line and stormed forward to give De Bruyne a glorious opportunity in the 23rd minute, but Belgium's top scorer in qualifying dragged wastefully past the near post.

Vertonghen was proving a potent attacking threat from full-back and he forced DaMarcus Beasley into a vital goalmouth clearance, with Marouane Fellaini poised to convert.

Influential USA right-back Fabian Johnson departed with a hamstring injury after the half hour, although the pacey runs of replacement DeAndre Yedlin provided a useful counter-point to Belgium's razor-sharp threat on the break.

Howard was forced into an acrobatic stop to touch Dries Mertens' looping header behind two minutes into the second period, and Belgium settled into the groove of calm, assured possession football they were denied during the opening half.

De Bruyne and Origi somehow both failed to convert Vertonghen's brilliant 54th-minute cross and the young striker flicked a header onto the crossbar two minutes later.

Vertonghen called Howard into action once more before Zusi caused panic on an increasingly rare USA attack, although they returned to the back foot as Mertens prodded past the near post - his last act as Kevin Mirallas was introduced.

The attacker displayed clever footwork to set up Origi, but Mirallas' Everton club-mate Howard was again equal to the task after 72 minutes.

Roles were reversed when Origi sent Mirallas clear with a cute threaded pass, only for Howard's excellence to come to the fore again as he saved brilliantly with his boot - a stop possibly bettered by pushing Eden Hazard's 80th-minute half-volley out of the far corner.

There was an air of inevitability in Howard keeping out Origi's rasping shot and turn after Hazard smashed into the side-netting, while Kompany instigated a 90th-minute counter only to have a scuffed attempt impressively saved.

Somehow the USA retained an attacking threat amid the onslaught and the sight of Chris Wondolowski blazing over unmarked from an offside position served due warning to Belgium heading into extra time.

Having almost single-handedly brought about the additional period, Howard was beaten by De Bruyne after Lukaku's fresh legs proved decisive down the left flank, and the powerhouse striker made it two as a Belgium break finally came to fruition.

With the game seemingly up, Jurgen Klinsmann threw on Green and his swivelled volley put the match back in the balance.

After Jones' close shave, Dempsey looked destined to send it to a shoot-out but it was Courtois' turn to provide goalkeeping heroics after a brilliant set-piece routine as Wilmots' charges held on.