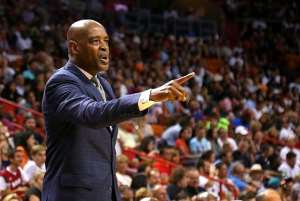 The appointment of Brooklyn Nets coach Kidd is expected to be announced in the coming days, with the Nets to receive two second-round draft picks in return from the Bucks.

Kidd pushed for a promotion at the Nets and more control and, with the team unwilling to meet his demands, the 41-year-old looked for opportunities elsewhere.

In a statement on Monday, Bucks general manager John Hammond announced the departure of Drew without saying anything about Kidd.

"Despite the challenging season, Larry always handled himself and represented the Bucks in a first-class manner," Hammond said.

"Larry did the best he could in a difficult situation, especially given all of our injuries. I want to thank Larry for all of his efforts, and we wish him the best of luck in his future endeavours."

In his first season as coach, Kidd led the Nets to the second round of the play-offs before they were beaten by the Miami Heat.

The Bucks finished the 2013-14 season with a league-worst 15-67 win-loss record in Drew's only campaign in charge.