Robben apologises for diving against Mexico 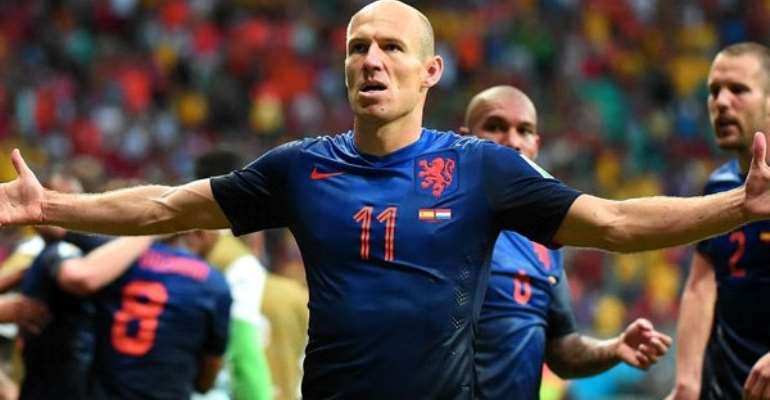 Arjen Robben has apologised for diving during Netherland 's dramatic comeback victory over Mexico in the World Cup round of 16 at Arena Castelao on Sunday.

Robben tormented the Mexican defence on numerous occasions with his pace, skill and direct running, and had several penalty appeals turned down before finally winning a spot-kick in the second minute of injury time when he went down under a challenge from Rafael Marquez.

Substitute Klaas-Jan Huntelaar converted from 12 yards to send the Oranje into the last eight of the tournament, after Giovani dos Santos' opener had been cancelled out by a late Wesley Sneijder equaliser.

After the match Robben insisted the incident which won the game was a justified penalty, but admitted going to ground far too easily on one occasion in the first half.

"I have to be honest and must apologise," he told NOS. "One of the moments in the first half was a dive. Sometimes you get kicked, but that was not the case at that particular moment. I shouldn't have done that and I'm really upset with myself about it. It was a silly action.

"The other one inthe first half was a clear penalty. If that's not a spot-kick, then what is...

"The one at the end was a just penalty call as well."

Robben also revealed why he entrusted Huntelaar with the responsibility of the penalty rather than taking it himself.

"Usually I am comfortable with taking a penalty, but this time I was the one who was tackled," he explained. "I felt comfortable that Huntelaar would capitalise.

"It was his moment, he deserved this. I'm almost crying from the emotions. The feeling is so strong, we want to win this, to fight together. These youngsters ... I am so proud."

NDC’s Position On Ballot A Sign Of Second ‘Massive’ Defeat –...
55 minutes ago