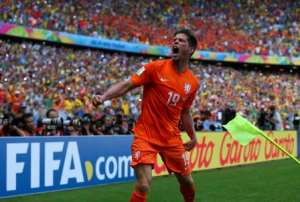 Klaas Jan Huntelaar came from the bench to hunt Mexico out of the Estadio Governador Placido Aderaldo Castelo in the heat of Fortaleza.

The Schalke 04 striker scored from the spot in time added on to put the Netherland's noses in front when the flying Dutch man and tormentor Arjen Robben was wrongly adjudged to have been fouled in the box by captain Rafael Marquez.

Wesley Sneijder cancelled out Giovani dos Santos' excellent early second half strike with a blistering right footed shot in the 88th minutes which escaped the eyes of goalkeeper Guillermo Ochoa of Mexico.

The El Tri were more comfortable playing under 30 degrees C and pushed the game to the Dutch creating more goal-scoring opportunities.

Things turned worse for the Dutch in the 9th minutes when AC Milan midfield marshal Nigel de Jong got himself into the injury books forcing coach Louis van Gaal to make an early substitution by bringing on Bruno Martin Indi.

The Mexicans threatened the Dutch with some lovely attacking build-ups in the first half but failed to open their goal account. The Netherlands were also lucky not to have conceded a penalty when Vlaar defended with a high foot on Hector Herrera.

The Dutch were counting on the individual brilliance of Robin van Persie and Bayern Munich forward Arjen Robben but the experienced Rafael Marquez was equal to their tricks.

Mexico were finally rewarded for their effort in the 48th minute when Giovani dos Santos gosted on Vlaar's attempted header and smacked one passed Jasper Cillessen.

With defeat staring in the face coach Louis van Gaal had to throw in everything but the brilliant Guillermo Ochoa kept Mexico out of trouble deep in the game when he punched out Stefan De Vrij's header from Robben's corner kick.

As the heat grew on the Dutch, Jan Klaas Huntelaar was introduced to replace Captain Robin Van Persie who had a quiet day and his introduction made the magic for the Netherlands as his first header from a corner was lashed on by the unmarked Sneijder who drove a powerful volley into the net.

The Dutch was finally rewarded with a penalty in time added on thanks to Robben's trickery in the box. Huntelaar stepped up to take the spot and scored the decisive goal for the Dutch to pushed them through to the quarter finals stage where they will meet Costa Rica.