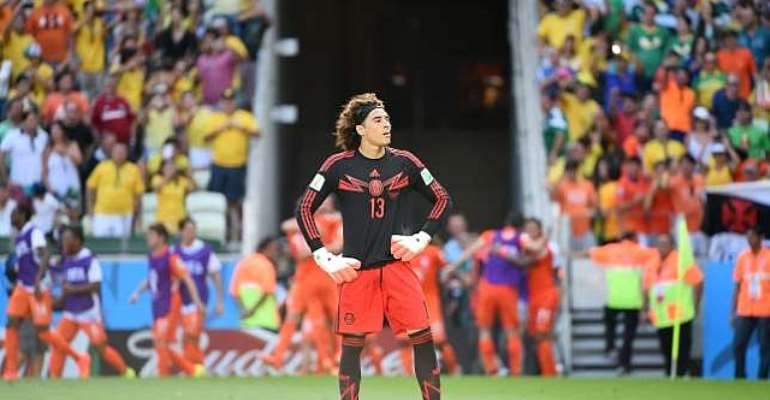 Miguel Herrera's men were sent packing from the tournament after conceding two late goals to lose 2-1 to the Netherlands in their round-of-16 clash in Fortaleza on Sunday.

Mexico were on track to reach the quarter-finals at a World Cup for the first time since 1986 when Giovani dos Santos scored three minutes into the second half.

But their hopes came crashing down during the closing stages after Wesley Sneijder equalised in the 88th minute, before substitute Klaas-Jan Huntelaar converted a controversy penalty in the fourth minute of injury-time, with replays suggesting Arjen Robben had made the most of minimal contact to earn the spot kick.

Despite falling agonisingly short of a last-eight berth, the in-demand 28-year-old goalkeeper felt his team-mates should be proud that they tested a team of the Netherlands' calibre.

"Losing like that, in the last few minutes, is tough to take, especially as we'd played so well," Ochoa told FIFA.com post-game.

"But you mustn't forget that we were up against a really great team and we came very close indeed [to winning]."

Sunday's defeat meant Mexico have failed to make it past the round of 16 at six consecutive World Cup finals.

Mexico lost to Bulgaria on penalties in 1994, while they were beaten by Germany four years later.

They were accounted for by rivals the United States in 2002 before suffering back-to-back losses to Argentina in 2006 and 2010.

But Ochoa insisted Mexico's inability to progress beyond the round of 16 had not become a psychological hurdle.

"We could have won this game but you have to admit that the Dutch have great players," he said.

"We lost because of footballing reasons, not psychological ones."

Ochoa added: "There'll be plenty of time later for analysis and to think about what we need to do next.

"What's clear to me right now is that we can leave here with our heads held high.

"We need to keep working hard and come back even stronger for the next World Cup."