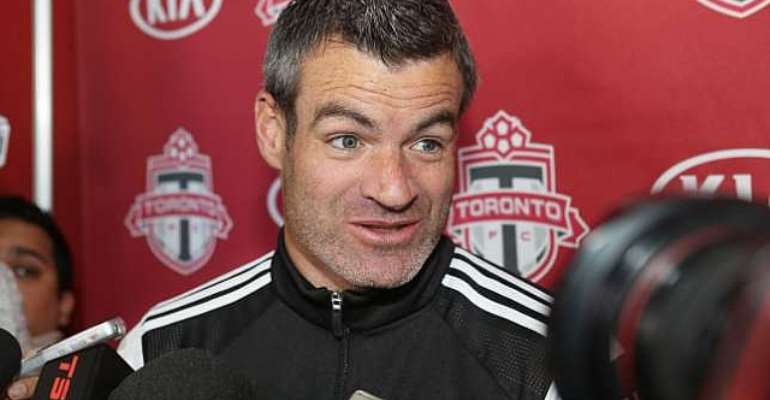 Ryan Nelsen's men are fourth in the East after 12 games, five points adrift of pacesetters Sporting Kansas City and DC United - though the club have played four games less than the top two.

Toronto will have the chance to close the gap when they travel to Chicago Fire - bottom in the East - on Wednesday, before hosting high-flying DC United in a blockbuster match at BMO Field on Saturday.

First on the agenda is Toronto's midweek clash with the Fire, who will also be in action against Sporting on Sunday, and coach Nelson said his team are full of confidence after Friday's entertaining 2-2 draw at New York Red Bulls.

"In a league of parity, any points away from home are very valuable," Nelsen said.

"It keeps our record against Eastern Conference teams very good and now we have to go to Chicago away, we can go to Chicago full of confidence looking to win there."

Key to Toronto's hopes is England international Jermain Defoe, who has scored four goals in as many games - including a brace against Columbus Crew at the start of June.

Chivas will go head-to-head against fellow strugglers San Jose Earthquakes, ahead of the weekend's showdown with the East's second-bottom club Montreal Impact.

In other fixtures, West's table-topping Seattle Sounders travel to Vancouver to play the Whitecaps on Saturday.

The Sounders - 10 points clear in the West - are in the midst of a five-game unbeaten streak after defeating rivals DC United last week and should get the job done against the Whitecaps, who have only won one of their past five league games.

At Rio Tinto Stadium, the stuttering New England Revolution will be out to arrest a three-game losing streak when they take on Real Salt Lake on Friday.

Real Salt Lake have also endured a poor run of results, with their last five games consisting of three defeats and two draws.

Philadelphia Union - seventh in the East - will be hoping Conor Casey and Sebastien Le Toux can maintain their goal-scoring form against FC Dallas on Friday.

Casey - a former United States international - has scored four goals in past three games, while Frenchman Le Toux has added three of his own to help Philadelphia to two wins and a draw.

During that period the Union have scored nine goals - making them the most prolific team in the East.

Elsewhere on Friday, Los Angeles Galaxy are at home to Portland Timbers in their Western Conference clash.

Meanwhile, Houston Dynamo will be aiming to end two droughts when they face New York at BBVA Compass Stadium.

Houston have lost five consecutive games and have failed to score a goal during that period, conceding 13 in the process.