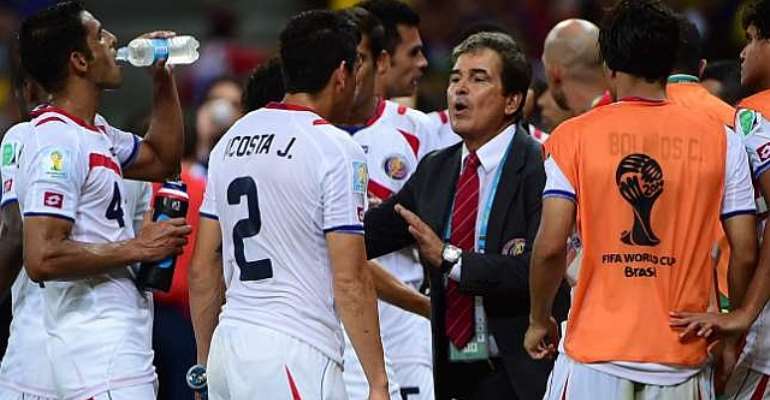 Pinto's men were forced to play with 10 men from the 66th-minute mark following Oscar Duarte's red card but they still prevailed 5-3 in a penalty shootout in Recife on Sunday after scores were level at 1-1 at the end of extra-time.

Costa Rica will now face the Netherlands in a last-eight showdown in Salvador on Saturday - the first time the Central American nation has made it beyond the round of 16 at a World Cup.

Speaking post-game, Pinto said Costa Rica's quarter-final berth was just reward for their efforts, having defied all odds to top Group D ahead of Uruguay, Italy and England.

"This group is immense. The work, sacrifice and execution were sensational," Spanish radio El Larguero quotes Pinto as saying.

"We deserved this for the sacrifice we made."
It could have been a lot different for Costa Rica after defender Duarte was dismissed by referee Ben Williams for a second bookable offence just past the hour mark, with Pinto's side leading 1-0 courtesy of captain Bryan Ruiz's opener seven minutes into the second half.

Costa Rica were on the back foot for the final 24 minutes at the Itaipava Arena Pernambuco and Greece eventually made the most of their numerical advantage thanks to defender Sokratis Papastathopoulos, who equalised in the first minute of injury-time.

Greece had chances to put the game to bed during extra-time but Costa Rica were not to be denied an historic result as they emerged victorious on spot-kicks, following Theofanis Gekas' missed attempt, much to the delight of Pinto.

"Justice was served. I had said it was not going to be easy against Greece," said the 61-year-old. "We are so happy.

"The players, manager, fans and you, the media - all those who supported us are so happy."