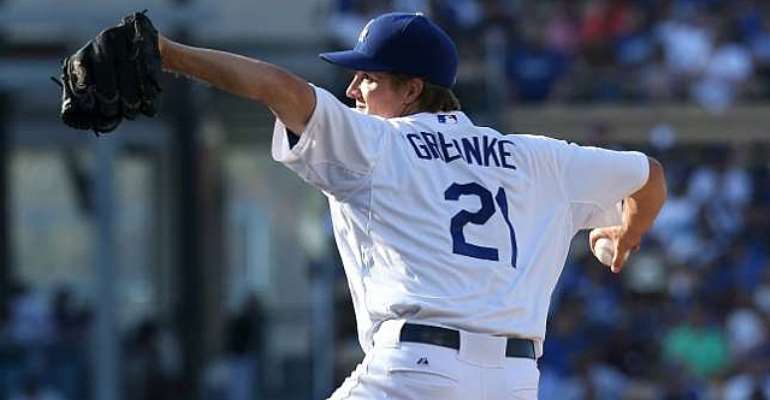 The Dodgers had lost 3-1 the day before but bounced back courtesy of Greinke, who allowed just one run and four hits at Dodger Stadium.

Greinke went on to strike out 10 and did not walk a batter in the faultless display on home soil in Los Angeles.

The Dodgers also produced the goods in the batting department, with six runs in the second inning guiding the team to victory, which saw them close the gap on National League West leaders the San Francisco Giants.

After the Giants lost 7-3 to the Cincinnati Reds, the Dodgers are now one-and-half-games adrift.

The Atlanta Braves were also big winners as they swept the Philadelphia Phillies in their doubleheader.

Tommy La Stella had a three-run triple, while Justin Upton had two hits as the Braves trounced the Phillies 10-1 in opening game on Saturday.

The Braves backed up that display with a 5-1 victory following Ryan Doumit's homer and La Stella's two doubles.

The Washington Nationals also eased past the Cubs after squaring off in their doubleheader in Chicago.

Washington earned a shutout against the Cubs for a 3-0 win before accounting for the Chicago franchise 7-2 later in the day.

In other results on Saturday, Dayan Viciedo hit a three-run homer as the Chicago White Sox defeated the Toronto Blue Jays 4-3.

The Texas Rangers claimed back-to-back wins after winning 5-0 over the Minnesota Twins, who slumped to a fifth consecutive loss.

Ian Kinsler stepped up with a three-run homer to help the Detroit Tigers to a 4-3 victory against the Houston Astros.

The Boston Red Sox accounted for the New York Yankees 2-1, while the Los Angeles Angels made it seven wins in eight games after downing the Kansas City Royals 6-2.

Rookie Eric Campbell had three hits as the New York Mets beat the Pittsburgh Pirates 5-3 and the Milwaukee Brewers won their fourth successive game after edging the Colorado Rockies 7-4.

The Oakland Athletics have won three games in succession thanks to their narrow 7-6 victory against the Miami Marlins - a 14th-inning marathon.

The Baltimore Orioles were beaten 5-4 by the Tampa Bay Rays and the Arizona Diamondbacks emerged 3-1 winners over the San Diego Padres.