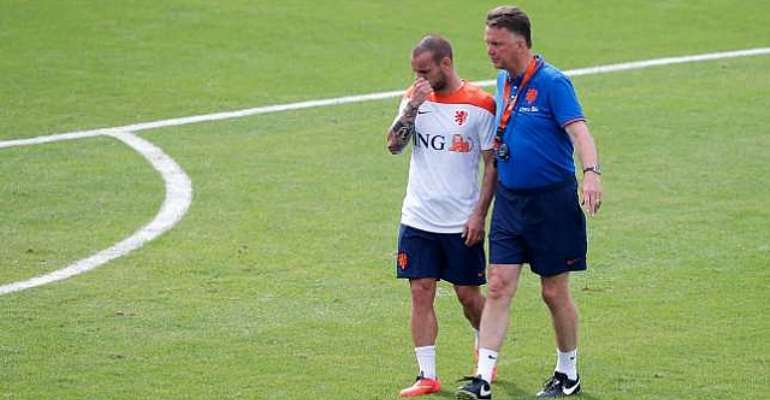 A serious knee injury to midfielder Kevin Strootman is said to be the catalyst for van Gaal's brave decision to move away from the famous Dutch 4-3-3 system.

Playing a 5-3-2 at the FIFA World Cup in Brazil, Netherlands have starred, topping a tough Group B with wins over Spain, Australia and Chile.

And Sneijder is buoyant ahead of Sunday's last-16 clash against Mexico as they aim to continue their excellent run.

"When you win, the atmosphere is always fantastic," Sneijder told FIFA's official website.

"We were in a very tough group and before the tournament a lot of people were saying that we didn't stand much of a chance of progressing.

"But we always believed and (just before the World Cup) we started to play a new system. From that, the confidence began to grow more and more.

"For the majority of us, this was a new system and most players had to execute tasks that we're not used to, so it required practice.

"We trained a lot using this system and worked hard on it in the friendly matches. And if you barely give any chances away against Spain, Chile and Australia, well, that's a big compliment.

Sneijder is not getting carried away, though, ahead of their meeting with Mexico.

Miguel Herrera's men are also unbeaten at the tournament, with wins over Cameroon and Croatia sealing their spot in the knockout stages.

"If you're in a group with Spain, Chile and Australia and you come first, winning all three games and scoring 10 goals, then you've done a fantastic job," he added.

"Almost no-one considered this to be possible but the important thing for us was to believe, and that's what we did from day one.

"We are very confident, but we always have to look to our next opponents and Mexico have a good team.

"They're a tough team to play against so, yes, we'll have to concentrate and focus purely on this match."