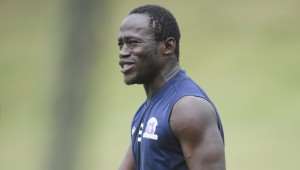 South African side Maritzburg United have axed their Ghanaian striker Yakubu Mohammed and flogged him back to his former club Ashanti Gold SC after just a season with the club.

Mohammed had been placed on United's transfer list last month following a season in which he battled to make any impact.

Farook Kadodia, the boss of Maritzburg, confirms that they have moved the 24-year-old back to his former club.

“We have moved Yakubu to Ashanti Gold on a permanent transfer. It is a done deal and he is already back there,” Kadodia tells KickOff.com.

“We had placed him on the transfer list, which means he was available to any club keen on him.”

Giants Hearts of Oak were among the clubs who were interested in signing the Ghanaian striker after he was released by the South African side.