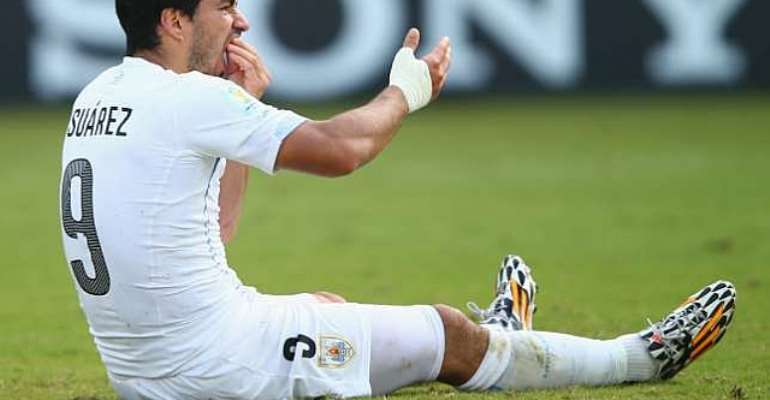 Suarez was hit with a four-month suspension from all football-related activities on Thursday and prohibited from playing for Uruguay for nine matches after biting Italy defender Giorgio Chiellini during Tuesday's FIFA World Cup Group D clash.

The Uruguayan Football Association vowed to appeal against the decision, which has left them without their star man for the remainder of the tournament, and Chiellini stated that he felt the punishment was excessive.

World players' union FIFPro have now come out in support of the under-fire frontman, who was previously in hot water for biting PSV Eindhoven midfielder Otman Bakkal in 2010 and Chelsea's Branislav Ivanovic last year, as Liverpool face up to the prospect of being without their prized asset for another lengthy period.

A statement read: "FIFPro stands by the principle of fair play and the importance of upholding the duty of care each player owes his fellow professional.

"FIFPro reminds all players it represents across the world of the responsibility they carry as role models, a privilege which is magnified at World Cup level.

"With his case subject to appeal, Luis Suarez has the right to due process. FIFPro believes all affected parties may benefit with time to remove the emotion, reflect and re-establish the facts in a calm and considered setting.

"This is a very serious matter, as reflected by the sanctions imposed by FIFA"s Disciplinary Committee. The sanction will be reviewed and FIFA will have to focus especially on the accumulation of sanctions including a four-month ban from all football activity.

"The fact that Suarez is prohibited from working for a long period must be addressed as it directly infringes his right to work. Also the fact that Liverpool FC is affected needs to be an important issue.

"Luis Suarez should receive all the support he needs to deal with any off-field issues he may be experiencing at this time. This means that the focus should be on the rehabilitation and serious treatment of the player. FIFPro believes that treatment must be a part of any sanction.

"Luis Suarez deserves all the support he needs including legal support in the appeal case in order to achieve a reduction of the sanctions.

"All affected parties will benefit from a well-advised decision especially when done in the interests of ensuring that he makes a successful return to the game."