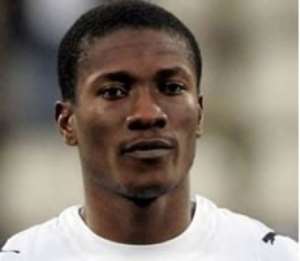 Black Stars captain Asamoah Gyan, physically and emotionally drained by the off-the-field incidents that culminated in Ghana's ignominious exit from the ongoing FIFA World Cup, said the team just blew a fine opportunity to build on an impressive showing at the last two competitions.

Gyan's equaliser failed to rescue the team in yesterday's 2-1 defeat to Portugal, but nevertheless, his second goal of the tourney made him Africa's all-time leading goalscorer in World Cup history with six goals (one in 2006, three in 2010 and two in Brazil), eclipsing the five-goal mark set by Cameroun legend Roger Milla two decades ago in the USA.

In a post match interview, a disappointed Gyan said despite the distractions occasioned by the late payment of the team's appearance fees and the expulsion of key men, Sulley Muntari and Kevin-Prince Boateng, the Stars came into the match to win but lost because the team conceded “silly goals”.

However, Ghana's leading marksman looked into the future with great hope as he believed the team had talented players who would bounce back in style at the next World Cup.

“We have young and quality players who can come back fighting for the nation in four years,” he said.

The first time in their World Cup campaign and in Brazil of all places, the much revered Stars floundered to a hapless Portugal in Brasilia to leave the tournament without a win. Doubtless, the opposition was weak but Kwasi Appiah's charges were themselves a bunch of tired souls, their energies appearing to have been sapped by days of agitation over appearance fees.

The agitators of that shameful episode, having been expelled from the team 24 hours before the match, however, did not leave the incident weighing heavily on the entire team as was seen in the field action.

The match, watched by about 67,500 at the National Stadium in Brasilia, kicked-off at high noon.

It saw a Portuguese dominance in the first half during which defender John Boye scored the opener for the opponent after deflecting what appeared a harmless ball into his own net after 31 minutes.

Indeed, Boye nearly scored a second for the Portuguese from a similar deflection before the break but missed for a cornerkick.

With world best, Cristiano Ronaldo, criss-crossing the field in typical fashion, the Ghanaian defence had a difficult time tracking him down.

It was from such spells that the world's best player cracked in an inswinger that grazed the crossbar early in the fifth minute, followed by a characteristic header to a cross that earned Fatau Dauda loud applause for his pin-point save in the 18th minute.

Ghana's chances in this half were few and far between but which Gyan floundered with.

But the Ghanaian captain was at his lethal best 12 minutes from the restart when he headed in a well laid cross by Kwadwo Asamoah from the left after the spade work from midfield by Andre Ayew.

Another headed chance availed itself moments later for Ghana to exploit but young striker Abdul Majeed Waris made a mess of the well flighted cross by skipper Gyan.

It was obvious young Waris had had enough and was substituted by Jordan Ayew, followed by another substitution that saw Italy-based Afriyie Acquah also get his World Cup baptism when he went on for Mohammed Rabiu.

And just when the cheers were loud for a Ghana breakthrough, it rather turned out a Portugal triumph as goalie Fatau strangely gifted the ball to Ronaldo by punching the ball back into play for Portugal's posterboy to drill home the match winner.

It was a strike that ended Ghana's historic and acrimonious campaign at this year's World Cup in Brazil.

What Will The Publication Of 260-Page Cocoa Road Audit Repor...
40 minutes ago