Ghana kicked out of World Cup after Portugal defeat 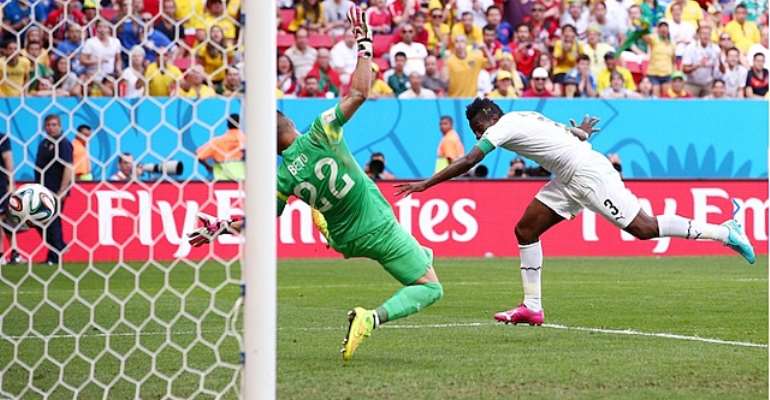 Ghana failed to reach the knockout stage of the 2014 after losing 2-1 to Portugal on Thursday in their final Group G match in Brasilia.

This the first time the Black Stars could not progress from the Group stage in three tournaments.

It was Portugal who fired the warning shot early on six minutes when Cristiano Ronaldo smashed the crossbar with a cross from the right.

That scary moment provided the tonic for Portugal to attack and midfielder Emmanuel Agyemang-Badu fouled Joao Moutinho with a sliding tackle.

Dauda was at hand again to deny the Real Madrid star's powerful header with a superb save.

It was a point-black header but the Orlando Pirates gloves man was agile and attentive on his line.

Ghana reacted and Gyan was teed up inside the box but his goal-bound shot was blocked by goalkeeper Beto.

On the half-hour mark, Portugal shot ahead through an own goal when defender John Boye's out-stretched right leg directed Miguel Veloso's innocuous cross into the net.

There were shouts for a penalty from Ghana players after Gyan dropped inside the box but referee Nawaf Shukralla waived play to continue.

In the second half, Ghana looked energized and leveled the scoreline in the 57 th minute when Gyan leapt to head home Kwadwo Asamoah's cross.

It was a record setting sixth goal for the Al Ain striker who is now Africa's all-time top scorer in World Cup history.

Three minutes later, Gyan turned provided and glided in a cross which was headed wide by Waris from scoring distance.

From there on it looked like a seesawing contest with Portugal popping up occasionally to mount attacks.

The reigning World Footballer of the Year profited from a poor goalkeeping display by flapping the ball back into play a save into play.

The rest of the ten minutes was topsy-turvy but Portugal looked confident and protected their lead to the end of the whistle.

But both teams could not progress from the taxing Group G as Germany and USA advanced.