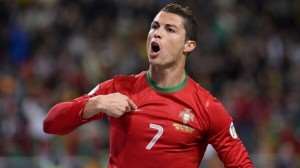 Portugal manager Paulo Bento has named a new-look team for this afternoon's crucial World Cup match against Ghana in Brasilia on Thursday.

The team sees Beto in goal, with Pepe returning in the centre of the defence with midfielder Miguel Veloso filling in at left-back following injuries to Fábio Coentrão and André Almeida.

Ruben Amorim will start in midfield, while Eder will lead the line with Cristiano Ronaldo and Nani in supporting attacking roles.

Portugal national football team manager Paulo Bento has meanwhile said that he will not resign even if the team were not to qualify for the knock-out stages of the World Cup for the first time since 2002.

Portugal is this evening playing Ghana in their final group match, and need to secure a sizeable victory while hoping that Germany and the United States fail to draw their match.

In related news, Uruguay international striker Luís Suarez will spend a large chunk of the year away the football pitch after FIFA this afternoon handed the Liverpool player a four-month ban relating to any football activity after he was found guilty of biting an opponent in Tuesday's match against Italy.

The ban will also cover Uruguay's next nine matches, which should see the player not represent his country for the whole of this year and part of 2015.